The joint project between Premium AEROTEC, EOS and Daimler demonstrates huge potential for the production of replacement parts and series-production components. 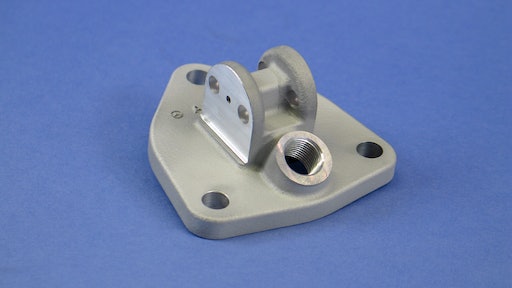 What began as a promising vision in May 2017 has now reached a successful conclusion: the project "NextGenAM" will work on the development of a pilot production line for a next-generation automated "Additive Manufacturing" process for partners Premium AEROTEC, EOS and Daimler.

The 3D printing process, also known as Additive Manufacturing (AM), has become more and more interesting as a complementary or alternative process to conventional manufacturing techniques. The technology is described as additive because of the way in which the process involves the application of layer after layer of thin material, which is then hardened by an energy source. Along with plastics and ceramics, it is also possible to produce metal components in a 3D printing process.

The aim of the pilot project was to develop a digitalized next-generation manufacturing line which would be able to produce aluminium components for the automotive and aerospace sectors significantly more cost-effectively than is currently possible. The successful outcome of NextGenAM: in terms of the overall production process at Premium AEROTEC, manufacturing costs could be reduced by up to 50 percent compared with existing 3D printing systems.

"As far as the aircraft industry is concerned, Premium AEROTEC is today already an international pioneer in the field of metallic 3D printing. The aim now is to build further on this expertise and to bring it to bear in other sectors as well," says Dr. Thomas Ehm, Chairman of the Executive Board of Premium AEROTEC. "The successful conclusion of NextGenAM thus represents another important building block in our strategy."

The secret lies in an ingenious and scalable additive production chain, which is fully automated right through to the point where the printed parts are mechanically sawn off the build platform. This means that no manual work is now required at any stage of the process, from the data preparation and central powder supply through to the AM build process itself and including heat treatment, quality assurance and separation of the components from the build platform. The technical heart of the system is the EOS M 400-4 four-laser system for industrial 3D printing using metal materials. A driverless transport system and robots ensure the smooth movement of the parts through every stage of the production line.

The entire production process runs itself, without operating personnel, from a central, autonomous control station. Fundamental to the system is the way all the machines used are networked. The order data are transmitted to the control station, which then prioritizes the various build requests and allocates them to an AM system. During the build process, the manufacturing status can also be retrieved on a mobile device, independent of location. Once the full production chain has been completed, the quality reports are sent back centrally to the control station. All the data necessary for the production of a digital "twin" can be accessed here, so allowing complete traceability, amongst other things.

Dr. Adrian Keppler, CEO of EOS, says, "We are very proud of what we have been able to achieve in collaboration with our partners Premium AEROTEC and Daimler. The NextGenAM project has provided a very tangible demonstration of how industrial 3D printing can be used cost-effectively in series production as part of an automated process chain. In combination with the possibilities for digitalisation as used here, the pilot plant represents nothing less than a milestone along the way to digital manufacturing."

Capacity can be extended

A continuous 3D data string with integrated quality management makes this production system one of the first examples of the benchmark for the future, Industry 4.0. The manufacturing process is completely scalable: the production lines can simply be duplicated to extend the capacity of the plant. This brings the promise of further substantial savings in the future as the numbers rise. Today, the pilot facility is already capable of the automated manufacturing of components to series-production quality standards.

Parts for Daimler are already being produced on the new technology line at Premium AEROTEC: the truck unit, for example, is already using the first replacement part manufactured at Premium AEROTEC. This is a bracket for a truck diesel engine.

Replacement parts for trucks and buses

The 3D printing process is particularly useful in the replacement part sector since, in the event of a tool problem, infrequently required parts can often be reproduced more cost-effectively than with conventional sand or pressure casting processes. The first requests for 3D-printed replacement bus parts in aluminium are currently being examined at the Center of Competence for 3D printing at Daimler Buses. The analysis team in the passenger car area is also currently considering suitable potential applications.

“Additive Manufacturing is also suitable for smallest-series production of new vehicles (limited editions). Systematic development of the parts specifically for 3D printing means that the production costs can be further reduced and the quality optimized," according to Jasmin Eichler, Head of Future Technologies at Daimler AG. "3D printing also makes particular sense during the advance development of vehicles. The low numbers required can often be produced more cost-effectively, and faster, with Additive Manufacturing than with conventional production processes.”

And this applies just as much for vehicles with a combustion engine as for electric cars. 3D printing is also eminently suitable, for instance, for the production of the integrated base plates that carry the cooling lines for the batteries in electric vehicles.

High product quality comes as standard in the pilot facility: there is also provision for the use of a high-strength aluminium/magnesium/scandium alloy (also known as Scalmalloy) for parts used in the aviation and aerospace sectors.

For the automotive sector a classic aluminium alloy (AlSi10Mg) is used, the material properties of which have been continually improved over the course of the pilot project. The material strength and finish quality, amongst other factors, have been significantly improved compared with 2 years ago when the cooperation started.

Outlook: 3D printing as a production method with good prospects

Now that all the quality checks so far have been passed with such promising results, preparations are under way for an audit according to the requirements of the stringent industry standard VDA 6.3. This is one of the prerequisites at Daimler for the supply of series-production components by contract printing suppliers. The automation of the entire AM production chain will in future make it possible to manufacture larger batches in series production – with the same reliability, functionality, durability and economic efficiency as conventionally manufactured components. Components for new vehicles can be optimized for 3D printing during the design phase, bringing the promise of further advantages in terms of cost. 3D printing also delivers weight benefits, which are of particular interest for electric vehicles. When it comes to replacement parts, 3D brings the advantage, going forward, of saving warehousing costs – because parts can instead be produced "on demand". This vision for the future is also known at Daimler as "Digital Stock", in other words the centralized availability of digital manufacturing data to allow the decentralized production of replacement parts using 3D printing.

As you can see, 3D printing is well on the way to becoming further established within the automotive and aerospace sectors as an additional, very versatile and comparatively young production method.

Premium AEROTEC is the first component manufacturer in the world to supply 3D-printed components made out of titanium alloys for the series production of Airbus aircraft. The company is a global player in the aviation sector. Its core business is the development and manufacture of aircraft structures made out of metal and carbon fiber composite materials. The company operates sites in Germany in Augsburg, Bremen, Hamburg, Nordenham and Varel. Premium AEROTEC took on responsibility here for the complete production process involved in the joint project.

EOS is the leading technology supplier in the industrial 3D printing of metals and plastics. Established in 1989, this independent company is a pioneer and innovator of comprehensive solutions in the additive manufacturing sector. A product portfolio comprising EOS systems, materials and process parameters, gives customers crucial competitive advantages in terms of the quality and long-term economic sustainability of their manufacturing processes. As its part of the joint project, EOS provided the complete 3D printing technology and associated software solutions as well as the control station for linking and managing the production chain.

Daimler contributed its experience in large-scale production to the project. Research and advance development units worked very closely together. Aspects covered here included the sample components, computational robustness and the digitalization of the component data for the complete production process. The testing of the sample components was likewise something that was covered by car manufacturer, as was the production of a standardized manufacturing specifications book for the 3D printing. Daimler was furthermore responsible for monitoring validation and certification according to the VDA 6.3 standard with respect to series production.