Bosch Rexroth's MASAR software is part of an entire modular system OEMs can use to implement the Internet of Things in their machine designs. 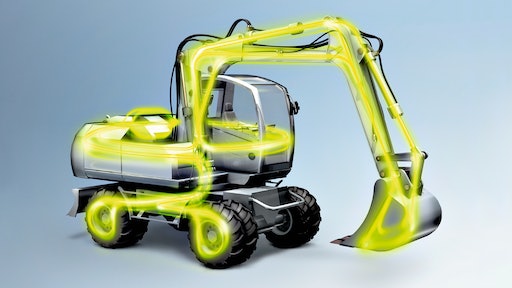 Bosch Rexroth has developed an entire modular system made up of mobile electronics, software, control panels and electrohydraulic components to facilitate a data exchange between an engine’s control unit and hydraulic systems. The software is scalable and can be used on any make of vehicle with minimal programming input. Rexroth’s open software, MASAR, also enables manufacturers to configure special functionalities if required.

Bosch Rexroth is in a unique position in that it can draw on the expertise of Bosch in the fields of fuel injection, engine management and exhaust aftertreatment. Mobile hydraulics specialists and engine electronics developers and programmers collaborated to build and test this technology.

Dr. Alexander Flaig, Head of Engineering Mobile Electronics and Systems at Bosch Rexroth AG, says, “Electronified mobile hydraulics is the basis for lower fuel consumption and exhaust emissions, as well as the transfer of functions to software. The scalable and, above all, open hardware and software architectures make implementation possible in a way that is both economical and customizable.”

Networked hydraulics can help manufacturers to meet increasingly demanding emissions regulations by working alongside variable pumps, as well as an intelligent performance management that can be adjusted to the engine. Before this, manufacturers had to rely on downsizing by using smaller, turbo-charged engines, with the maximum torque set to lower speed ranges. This affected the hydraulics, which now had to provide the same performance as before, with less input energy.

The digitally-controlled implement hydraulics makes an important contribution to fuel efficiency, as it decouples work performance from engine speed. In addition, electrohydraulics makes it possible to automate complex maneuvers and working sequences that were previously done manually, while providing a safe environment for operators that conforms to international standards. It also allows the machine to work in different modes, making it more versatile and capable of carrying out more tasks.

Connecting hydraulics to a network can also reduce the number of system failures. Previously, any problems would require a mechanic to come directly to the operator, which could take hours or even days, particularly in remote areas.  No, a variety of sensors for pressure, temperature or vibrations can be built into a hydraulic system. The data is then gathered and forwarded via a central radio unit to an operator’s or a manufacturer’s private server, or the Bosch IoT cloud, allowing manufacturers to detect increasing wear before it results in a failure. They can then take the necessary predictive maintenance measures. This also reduces maintenance costs, as a mechanic can specify which parts actually need replacing.

Bosch Rexroth is also developing the capability of integrating BODAS DI4 control panels to the machine without the need to extensively upgrade the vehicle. As a freely programmable device, the BODAS DI4 is specifically optimized for networked applications and can offer extensive options for individual visualization and function assignment. Dr Alexander Flaig says, “Further down the line, there will be a seamless exchange of information between the mobile electronics’ control unit and the data cloud. This will significantly increase availability and productivity.  New business models can also be created based on data usage. In short, software for off-highway vehicles is poised to disrupt the state-of-the-art.”

The databases include a new proving ground environment with nine testing areas, including a 5-mile circle track and a hill grade surface.
Mechanical Simulation Corp.
January 8, 2021
Follow Us