FPT's study which received the award focused on the challenges of introducing API CJ-4 oil in Latin America, as well as the potential benefits it could offer. 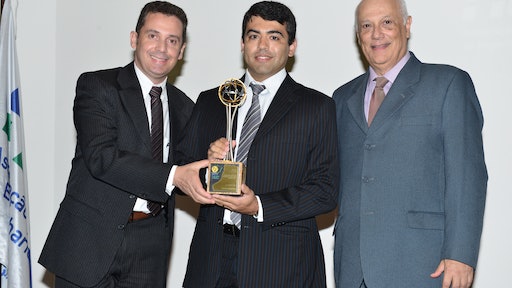 A research study on agricultural equipment carried out by FPT Industrial has been awarded first place in the Technology category at the 11th annual Environmental Awards organized by the Brazilian Association of Automotive Engineering (AEA).

The awards ceremony in São Paulo, Brazil saw the attendance of representatives from Anfavea, the National Association of Automobile Manufacturers; Sindipeças, the National Union for the Automotive Components sector; Cetesb, the Environmental Agency for the State of São Paulo; Ibama, the Brazilian Institute for the Environment and Renewable Natural Resources, together with members from academia and the media.

FPT Industrial’s study examined the challenges of introducing API CJ-4 oil in Latin America. It involved engineers from the manufacturer’s plant in Sete Lagoas, Brazil and performed field tests in collaboration with oil and gas multinational Petronas. API CJ-4 oil is used in engines running on ultra-low sulfur diesel fuel and is essential for the durability and performance of new engines manufactured after 2007. This particular Akcela Unitek 10W-40 API CJ-4 oil from Petronas was conceived in Europe and developed in co-engineering with FPT Industrial for a tailor-made approach.

Experiments conducted on Case IH A8800 sugarcane harvesters generated a technological innovation benefiting both the agricultural sector and the environment. The results saw a 30% decrease in oil changes for Cursor 9 Mar-I/Tier3 engines. Historically during the harvest, sugarcane producers would require seven oil changes with API CI-4 lubricant. The study found that by switching to API CJ-4 oil, only five oil changes (every 500 hours of operation) were needed throughout the harvesting period.

At the end of the tests, the engines were dismantled and a comparative evaluation of the main components was conducted along with an oil analysis. No negative impact on the engines’ lifecycle was detected and moreover by reducing the number of oil changes, less oil was discarded, thus providing an environmentally beneficial solution.

The results of the study conclude that the sugarcane harvesters spent more time in the field, increasing their efficiency and guaranteeing better productivity results for sugarcane producers.

The AEA Environmental Award is an important industry recognition which confirms FPT Industrial’s commitment to technology and sustainability. The brand previously received an Honorable Mention in 2014 for a study on the “Performance and emissions of an engine operating with low hydrogen outflows.”

A new report from Smithers Apex says the lubricant industry will need to change its business models for the 470 million electric vehicles expected on roadways by 2029.
July 2, 2019
Engine Oil

The new standards are designed to provide greater protection and fuel efficiency for gasoline-engine-powered vehicles.
June 6, 2019

LiuGong intends to complete three kinds of graphene-modified lubricants in 2 years and achieve application of the lubricants in its construction equipment products in 5 years.
LiuGong Machinery Corp.
July 9, 2018

Electrification and other techniques for emissions compliance and efficiency gains are changing the performance needs of powertrain lubricants.
Sara Jensen
March 16, 2018
Engine Oil