The ULEMCo hydrogen dual-fuel bin lorrie runs on hydrogen and diesel fuels, and will help reduce emissions within the communities it operates. 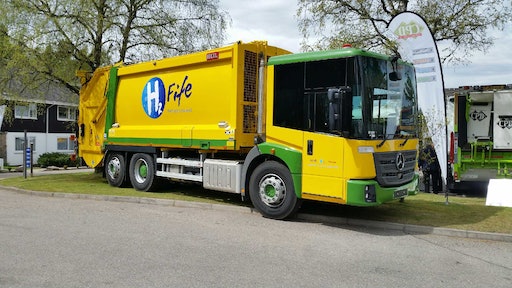 ULEMCo, the company championing the use of ultra-low emission hydrogen fuelled vehicles, has delivered the world’s first hydrogen dual-fuel bin lorries to Fife Council in Scotland. The lorries are converted to run on dual hydrogen/diesel fuels, and will deliver reduced carbon emissions as well as improve air quality for the local community. The new bin lorries are planned for use in densely populated urban areas, where improving air quality is a huge concern.

Liverpool based ULEMCo, owner of the dual fuel technology, carried out the conversion on the bin lorries: two Heil Farid vehicles adapted to run on both hydrogen and diesel. The work is part of a project that will also see the conversion of five Ford Transit vans and 10 Renault HyKangoo vans to hybrid electric and hydrogen fuel cell operation.

Cllr Lesley Laird, Deputy Leader and Executive Spokesperson for Economy and Planning says, “Fife is leading the way in clean energy. We envisage Levenmouth Community Energy Partnership becoming home to one of Europe’s largest fleet of hydrogen dual-fuel vehicles. I want to thank the partnership for all their hard work bringing this innovative project to life.”

Amanda Lyne, Managing Director of ULEMCo, the specialists in hydrogen vehicle engineering, says, “This is a global first for hydrogen vehicles and a really great example of the innovative approach that is needed to deliver the low carbon and low emission vehicles of the future.”

Levenmouth Community Energy Project aims to position Fife as a global leader in clean energy. The Hydrogen Office in Methil will become a world-class demonstrator of hydrogen applications generated from renewable sources.

Last year, The Scottish Government recognized the importance of this project by awarding £4.3 million from its Local Energy Challenge Fund. There will be hydrogen refueling points at both the Hydrogen Office, Methil and at the Council’s depot at Bankhead, Glenrothes.