An increase in 2010 sales above the sector average shows that Eberspaecher is experiencing strong growth. 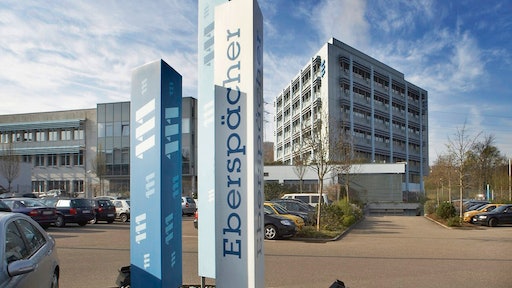 After a brief slump during the economic crisis in 2009, the Eberspaecher Group returned to profit in 2010 and saw a considerable increase in sales. Besides economic recovery, the reasons for this positive development were significant new business wins and gaining shares in strategically important growth markets. Sales increased by 44% and the number of employees by 7%. The management expects this upward trend to continue and sales to rise again in 2011.

In the largest division, the Exhaust Technology Division, the gross sales achieved 1,599 million euros; net sales of 820 million euros were recorded after excluding transitory items. Eberspaecher also profited in this division from the increased demand for high-quality premium vehicles and the increasing export levels of German manufacturers. A key contribution to the development of sales was also the start of production of exhaust systems for commercial vehicles in the USA in line with the new stringent EPA-2010 standard. In this market segment, the German supplier plays a leading role in North America.

The Climate Control Systems Division also showed positive developments. Sales increased by 63% to 335 million euros. This growth was supported by all the product groups: fuel-operated and electrical vehicle heaters, as well as the bus air-conditioning systems launched in 2010.

In the last business year, Eberspaecher took over the bus air-conditioning specialist Suetrak from the US Group Carrier, thus positioning itself as a complete provider of air-conditioning and heating solutions in the international bus market. Eberspaecher has also expanded its product portfolio to meet evolving needs in the exhaust technology sector: After taking over the Prototechnik Division of Ricardo Deutschland GmbH, the newly founded Prototechnik GmbH & Co. KG is currently being extended to setup a competence center for lightweight engineering and special series production.

Further investments in international joint ventures in Russia and South Korea have provided the supplier with access to new customers – such as AvtoVAZ and Hyundai Kia. Moreover, the company is increasing its production capacities with new plants in Russia and Brazil. A new production facility is also being constructed in Germany: In the future, Eberspaecher will produce commercial vehicle exhaust systems in line with the forthcoming Euro 6 standard in Wilsdruff near Dresden. In order to meet this stringent regulation, which comes into force for all European commercial vehicles in 2014, the company has already secured the leading position in Europe.

Eberspaecher is also the global market leader for heating electric vehicles. It is the first supplier to equip electric vehicles as standard with high-voltage water heaters, for example in the Chevrolet Volt and the Nissan Leaf.

Eberspaecher has also become well established in the future market for vehicle electronics. A current example is the innovative control unit produced by the Herxheim-based subsidiary Eberspaecher Controls for the electronic darkening of the top glass panel of the new Mercedes SLK. “The number of electronic systems in a vehicle will continue to increase in the future. And Eberspaecher is leading the way,” Heinrich Baumann says proudly.

This year, the Managing Partner expects sales to reach approximately 2.5 billion euros and to achieve results on a par with last year. In the next three to five years, Baumann believes growth will increase above average with annual growth rates in double-digits: “We have consolidated our core business in Europe and with the aid of investments and acquisitions created the basis for significant growth and profitable developments in the coming years.”