During INTERMAT 2012, Hatz displayed its new 3- and 4-cylinder engine range as well as its Hatz Universal Power System concept study. 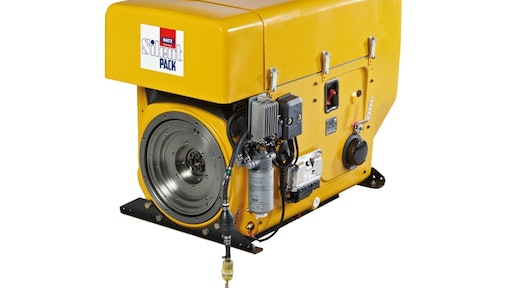 With no fewer than two premieres, the German engine manufacturer Hatz was at this year's INTERMAT in Paris from April 16 to 21, 2012. Firstly, the company displayed the further developed 3- and  4-cylinder engine series which will be equipped with a diesel particulate filter (DPF) from the beginning of 2013. Secondly, the concept of the "Hatz Universal Power System," (HUPS) which is made for a wide range of applications and a variety of application areas. The HUPS concept summarizes the core competences of the business segment Hatz Systems.

As well as the previously mentioned premiered products, there was also exhibits from Hatz's established product range, from the compact 1B engine series, the SUPRA series and the L/M series with its patented and worldwide acclaimed SILENTPACK.

On the Hatz stand the company's team of experts were available for discussions with journalists and guests.

Not least because of new emission regulations in the European Union as well as in the United States starting from 2013, the proven 3- and  4-cylinder engine series has undergone a technical upgrade. Also because of the sustainability of the Hatz products all engines of the 4_L/M_42 and 3_L/M_41 will be equipped with a DPF and can be identified by the name L/M_43.

In the 19 to 56 kW (USA) and the 37 to 56 kW (EU) engine-power class the legislation allows not more than 4.7 g/kWh nitrogen oxides and nitro carbons (NOx + HC). These can only be achieved with use of exhaust gas recirculation (EGR). The 4-cylinder engine 4_L/M_42 already features an EGR which has been successful since its introduction in 2008. The 3-cylinder engines will follow with the coming model upgrade.

A much bigger challenge for the development team was the required reduction of particulate matter (PM). Starting from 2013 a limit of 0.025 g PM/ kWh in the EU (Stage IIIB) and 0.03 g PM/kWh according to U.S. legislation (EPA Tier 4 final) respectively, has to be kept compared to 0.4 g kWh until the end of 2012. To achieve these limits the use of a DPF is necessary, which stores the particles in a filter system and burns them at regular intervals with the help of an active regeneration by increasing the exhaust temperature.

The HUPS concept is the all rounder and a problem solver, especially in   mobile applications in infrastructure weak environment.  In addition to electric current (up to 25 kVA), the system delivers air pressure (15 bar), hydraulic pressure (200 and 700 bar) and high-pressure water (150 bar) on site. Because of its many different applications the HUPS concept is ideal for construction companies, industry, railway, relief organisations as well as firefighters and technical aid organizations.

Besides the freely configurable and compact modular design, which leaves all options open to the combination of individual units, all common tools can be connected with standard couplings. In addition, the module can be configured self-propelled, detachable or mounted on a trailer or a loading bed of a truck. The HUPS is more flexible than any other system. Furthermore, no major engine of a large appliance is required, this reduces its operating hours and the consumption of resources.

With this concept study Hatz will carry out feasibility studies and evaluate the market potential for universal system solutions.