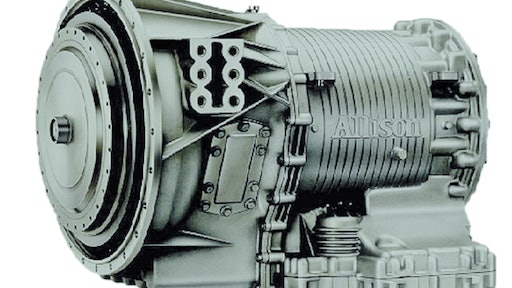 Bell has retained the popular Allison transmissions in its E-Series large ADTs; the transmission retarder has been removed to make space for the new inline 6 engine, and the B50E has received a 7-speed transmission.

Articulated Dump Truck (ADT) specialist Bell Equipment, the manufacturer of the largest range of ADTs in the world, turned heads at INTERMAT 2015 in Paris with a prototype of its B50E ADT, which was on show at the Bell stand.

The B50E will in time succeed the world's first production 50-tonner, the Bell B50D, and is a vital part of the second phase of the company's E-Series development program. This phase encompasses Bell Equipment's trucks in the 35, 40, 45 and 50 ton payload classes.

Bell Equipment's Product Marketing Manager, Tristan du Pisanie says, "Our smaller 20 to 30 ton E-Series ADTs formed the first phase of development. They have been well accepted by the market so there has been no need for a change of approach with our larger trucks and we are excited to showcase our B50E prototype at INTERMAT. Importantly, this family of trucks shares a platform that is conceptually the same and is an evolution of our D-Series trucks, which have proven themselves as class leaders during their 12 years of operation all over the world."

Giving a walk-through of the E-Series large truck, du Pisanie explains that the distinctive and striking styling that was introduced with the small truck range has been carried through to the larger trucks. "The hood or bonnet now covers the air cleaner for a neater look while moving the lights into the bonnet and back from the front of the truck provides more protection of the lights."

The class-leading operator cab on the E-Series is an important feature and operators will be pleased with the efficient and clean ergonomics, low noise levels, a full-color driving screen incorporating the reverse camera display, B-drive automotive-style mouse navigation of the display screen, numerous storage areas including a cooled/heated compartment as well as sealed switch modules that are impervious to water and dust.

Under the hood Bell Equipment has chosen to continue using highly efficient Mercedes Benz engines. The Mercedes power plant is designed for trucking and ensures reliability, durability and lowest fuel burn without any performance compromise. In the relevant power classes Mercedes Benz has moved from V engines to Straight 6 engines to meet the Stage IV/Tier 4 Final legislation. Says du Pisanie, "This change has been incorporated into our E-Series large trucks resulting in an increase in kW/tonne to deliver better cycle times. The new engines from Mercedes Benz also show improvements over the outgoing 500 Series engines in the areas of emissions, power density, noise levels and fuel consumption; so we look forward to seeing these engines offer more value to our customers."

In terms of transmissions Bell has listened to its customers, who have universally praised the use of Allison transmissions in the ADTs. However, there are two noteworthy changes; firstly the transmission retarder has been removed to make space for the inline 6 engine and secondly the B50E has received a 7-speed transmission.

Operators have always been impressed with the powerful and automatic retardation offered by Bell ADTs and this will be maintained through an automatic retardation function in the cooled wet brakes. In addition the 7-speed transmission on the B50E gives an improvement in the ratio steps between gears, for better performance and fuel burn, thanks to optimized transmission shift points.

The payloads and capacities of the B35E, B40E and B45E have also been increased to further strengthen Bell Equipment's competitive offering with their large trucks. Comments du Pisanie, "Matching payloads to loading tools and the number of passes by an excavator is still a key factor but we have seen that we need to shift the payload limits marginally to make room for those applications where the trucks are loaded with materials with differing densities."

"Throughout our large trucks there are many features and specs that differentiate a Bell ADT from competitor ADTs. Most importantly all of these features impact favorably on the cost per tonne of our trucks. Lowering the cost per tonne on our E-Series truck was a major goal of the program because a lower cost per tonne allows our customers to either be more profitable or be more competitive when tendering for projects. We have run comparative testing in various applications between our D-Series and E-Series trucks. This data, when combined with various financial scenarios that take into account the purchase, resale, repair and maintenance costs of a truck, shows a consistent improvement in cost per tonne for the E-series," says du Pisanie.