In addition to its Stage V ready range of engines, Deutz will exhibit its new TCD 2.2 engine which is available in a diesel and liquefied petroleum gas variant at bauma. 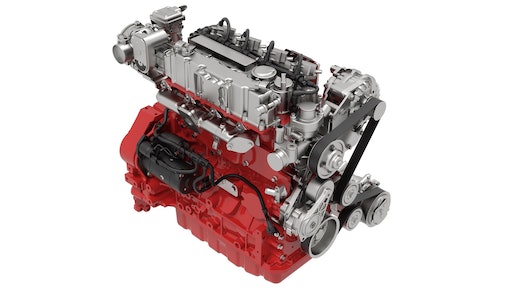 DEUTZ will be presenting its latest engines at bauma in Munich, the world's biggest trade fair for construction equipment, from April 11 to 17, 2016. In addition to the existing Stage V ready product range, the Cologne-based engine manufacturer will be unveiling its new TCD 2.2 diesel and gas engine, as well as the new gas variant of its tried-and-trusted TCD 2.9.

bauma is the world's undisputed flagship trade fair for equipment, vehicles and machinery used in construction and mining. These applications comprise the largest target group for DEUTZ engines, making this the most important industry gathering for the company.

This year, at a stand occupying 400 sq. m, DEUTZ will be giving the new TCD 2.2 its premiere. This 2.2-liter engine, a 3-cylinder variant of the successful TCD 2.9 4-cylinder engine, will expand the independent engine manufacturer's offering in the lower power output range. The TCD 2.2, with a rating of up to 55 kW, will be particularly suitable for applications in material handling and compact construction equipment. What's special about the engine is that it will be available in both a diesel and a liquefied petroleum gas (LPG) variant. The gas variant will produce up to 42 kW and is a genuine first within DEUTZ's otherwise diesel-only product range. The TCD 2.2 will go into series production in 2019 when the EU Stage V emissions standard comes into force. And because all TCD 2.2 and 2.9 variants are based on the same engine platform, customers will benefit from extensive synergies when it comes to integration, for example with regard to connections and spare parts. This will save on costs and development work.

DEUTZ will also be presenting an LPG variant of its successful TCD 2.9 engine at bauma. The engine will produce up to 55 kW and have a similar size and configuration to its diesel equivalent. Here too, customers will benefit from the use of the same engine platform when it comes to integrating the engines into existing applications. The new gas variants – called G 2.2 and G 2.9 – mark DEUTZ's entry into a line of business that offers significant future potential, with LPG engines offering a number of advantages. For example, they are particularly well suited to equipment designed for use in the enclosed spaces of buildings, as liquid gas produces far fewer emissions than diesel. The engines also have a three-way catalytic converter that means they meet the EU Stage V emission standard without the need for a costly exhaust aftertreatment system and thereby offer a convenient alternative that gives customers additional flexibility.

"By expanding our product range with the TCD 2.2 we are re-affirming the DEUTZ promise to always provide the best possible solution for each individual customer. Our new gas engines, as well as expanding our power output range, are helping us to exploit the growing potential offered by alternative fuels," explains Michael Wellenzohn, member of the Board of Management of DEUTZ AG with responsibility for Sales/Service & Marketing.
Gas engines are by no means uncharted territory for DEUTZ; in fact they mark a return to the company's roots. The very first DEUTZ engine from 1867 was the atmospheric gas-powered engine. And gas was also the fuel for the world's first four-stroke engine – the Ottomotor – developed in 1876 by the founder of DEUTZ, Nicolaus August Otto. Throughout the company's history, numerous gas-powered engines have followed in their footsteps.

In addition to its new products, DEUTZ is using bauma 2016 to showcase its popular TCD product range, a Stage V ready family comprising the TCD 2.9, 3.6 and 4.1 four-cylinder models and the six-cylinder TCD 6.1 and 7.8. Visitors to bauma will also be able to see the top-selling TCD 3.6 as a powerpack encompassing engine, cooling system and exhaust aftertreatment.

Engines with capacities of 4 liters and above are fitted as standard with the following DEUTZ exhaust aftertreatment features: diesel oxidation catalyst (DOC), diesel particulate filter (DPF) and selective catalytic reduction (SCR). DPF, which is currently available as an option for the 2.9 and 3.6-liter models, will be mandatory when Stage V comes into effect. All TCD engines therefore already meet the EU Stage V emission standard that will come into effect in 2019 (based on the EU Commission's proposal published on September 25, 2014). DPF plays a key role in meeting the future specifications regarding soot particles. Engines equipped with DPF are already being sold on the market as Stage V ready. Customers who buy these engines are benefiting from a future-proof technology and from DEUTZ's many years of experience in the use of DPF systems. The size and configuration
of the Stage V ready engines with DPF will remain virtually identical as the industry transitions from the current EU Stage IV to EU Stage V, meaning no expensive changes will have to be made to customers' equipment.

In the category of compact engines with capacities of under 4 liters, the high-torque variants are a particular highlight. The TCD 2.9 and 3.6 High Torque each generate a maximum torque of 390 Nm but produce less than the 56 kW power output that would make them relevant for the next emissions standard (EU Stage V), which is why they do not need pan expensive SCR system. The two engines meet the current EU Stage IV standard only
using an open diesel oxidation catalyst (DOC) for exhaust aftertreatment. These engines are very popular with customers as so-called DOC-only solutions.

A new high-power version of the TCD 2.9, which is suitable for mobile machinery, is being presented for the very first time at bauma. For customers looking to downsize their equipment, the engine, whose output is up to 77 kW, can replace larger equivalents, thereby saving on weight, installation space and costs.

"For us, bauma is the perfect stage on which to present our developments to a wide audience of trade visitors. Whether its new engines or innovative variants of our existing products – we always offer our customers the solutions of tomorrow, today," says Wellenzohn.