CryoPower is a technology operating on diesel, natural gas or biofuels and is commercially attractive for heavy vehicle, marine and power generation applications. 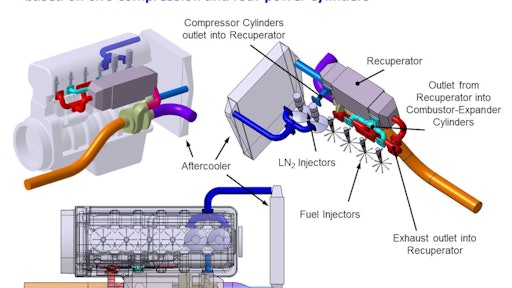 The Ricardo CryoPower concept is far from a refinement of existing engine technology – rather, it represents a complete re-imagining and re-engineering of the internal combustion engine. CryoPower completely redefines the processes of internal combustion to enable near-zero emissions combined with significantly improved efficiency in comparison with today’s state-of-the-art heavy-duty engines used in transportation, decentralized power generation, and marine propulsion.

Following the first six months of research carried out under the StepCO2 program part funded by the UK’s innovation agency, Innovate UK, the CryoPower R&D team – including specialists from Ricardo as well as technology and research partners the University of Brighton, HiFlux Ltd, and AMRC – has taken major steps in validating the CryoPower Cool Combustion (CPCC) process, through a program of both detailed simulation and rig testing of the key components and sub-systems, of this revolutionary engine concept. The first stage of the StepCO2 program has confirmed the potential for CPCC to offer a near-zero emissions capability, in some cases offering lower tailpipe NOx emissions than in the surrounding air and removing pollution in towns and cities.

The CryoPower concept is based on the use of a separate induction and compression cylinder from that used for combustion and exhaust. This enables recovery of otherwise wasted exhaust heat to the working gas after the end of compression. For highest efficiency, the compression process is carried out isothermally, cooled via the injection of a small amount of liquid nitrogen. The liquid nitrogen is thus both a coolant and an additional energy vector, which offsets some of the fuel requirement. The combustion process utilizes either renewable biofuels or traditional fuels, either liquid or gaseous, and delivers heat energy back to the chilled and compressed intake air.

CryoPower was originally conceived as a means of enabling otherwise unachievable improvements in fuel economy and reduced CO2, targeted at achieving at least 60% brake thermal efficiency (equivalent to a fuel economy improvement in the region of 30% in comparison with the best current heavy-duty engines, and matching the peak efficiency of combined cycle power plants). The early development work carried out on the single cylinder test rig installed at the University of Brighton has validated this potential but has also demonstrated the highly impressive low-NOx emissions credentials of the CPCC combustion process. These results together with the extensive simulation and component and sub-systems research, present a clear pathway to the achievement of zero impact emissions heavy-duty applications running on diesel or a range of other liquid or gaseous conventional, bio- or synthesized low-carbon fuels. The concept is ideally suited to applications ranging from heavy-duty long-haul trucks, to stationary power, off-highway equipment, and self-powered and multi-mode railway traction.

In addition to demonstrating the potential of CryoPower, the research team has also developed a simplified engine concept known as ThermoPower. This concept uses the same basic engine architecture as CryoPower but without the use of liquid nitrogen. ThermoPower is particularly suited to space-sensitive vehicle applications and represents a lower cost and more readily adoptable solution achieving over 50% thermal efficiency (equivalent to a fuel economy improvement of 15% in comparison with the best current heavy-duty engines) while retaining the low emissions potential of CryoPower.

“The initial results of the CryoPower StepCO2 program have been highly impressive in underscoring both the efficiency of this revolutionary heavy-duty engine concept, as well as its potential to achieve near-zero emissions operation on diesel or a range of liquid or gaseous conventional or low-carbon fuels,” comments Simon Brewster, CEO of Dolphin N2 Ltd, an independent company from Ricardo, established to develop CryoPower technology. “As we further progress our research towards the development of multi-cylinder demonstrators and ultimately, to vehicle applications, we will be seeking further partnerships with investors and technology partners, interested in pursuing this exciting and revolutionary engine technology with its potential for near-zero emissions heavy duty power.”