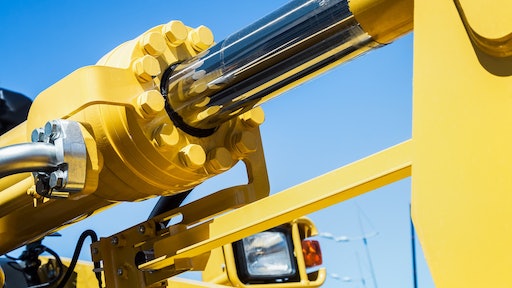 At their core, hydraulic fluids perform two key functions in equipment. First, they must be able to transmit power between machine components. Second, they must also protect the equipment’s components, which can lower the total cost of ownership (TCO) for a fleet owner.

Savvy equipment technicians realize, however, that properly formulated hydraulic fluids provide much more functionality beyond these two core criteria. They protect hardware against excessive wear. They minimize thermal and oxidative degradation. They slow contamination and sludge build-up in machine components. They prevent rust and corrosion, reduce friction and dissipate heat. In other words, well-designed hydraulic fluids are essential to keeping equipment functioning at peak performance throughout the entire lifetime of the oil.

So how do operators decide which hydraulic fluids will best fit their equipment’s operating parameters? Often, they rely on the information provided to them by lubricant manufacturers and oil marketers. To that end, it’s important to test hydraulic fluids under the most relevant conditions to provide accurate information on how the fluid will perform in real-world equipment.

Historically, predicting the oil lifetime has been gleaned from two standard bench tests for oxidative stability. But as equipment has evolved, so have the conditions under which the hydraulic fluid is functioning — and the tests in question are not necessarily an accurate reflection of real-world conditions. Fortunately, the A2F10 Piston Pump Test has been gaining traction as a method to differentiate fluids for oil lifetime. It more accurately reflects real-world conditions than its predecessors and gives end users the ability to determine more closely how long a hydraulic fluid should last in their equipment.

As hydraulic equipment continues to evolve, the demands placed on modern hydraulic lubricants have also changed significantly. Efficiency has increasingly become the name of the game, with particular focus being placed on lowering the TCO and increasing the amount of time between oil changes.

Concurrently, hydraulic fluids are being put under more strain than ever before as equipment demands the fluids do more with less volume. Fluids must improve their ability to protect equipment components and perform their core functions in today’s applications, and lubricant manufacturers are under increasing pressure to meet these new goals.

Lastly, equipment controls are becoming increasingly digitized and automated, which means hydraulic fluids are operating in more sophisticated systems. That sophistication requires additional characteristics that previous iterations of the fluids would not necessarily demand.

All of these emerging trends necessitate that hydraulic fluids be tested under the most real-world conditions possible to prove their ability to perform at high levels in these changing circumstances. Until recently, however, the testing regimen for hydraulic fluid performance remained mired in the past.

The two most common bench tests used to measure the antioxidant properties of hydraulic fluids and thus predict the oil lifetime are ASTM D943 and ASTM D4310. These tests are most often used by hydraulic fluid manufacturers because they are less expensive and take less time to conduct than field trials.

Initially, these bench tests provided enough information for end users to make educated decisions about what hydraulic fluids they should use in their machines. Unfortunately, the testing procedures have significant drawbacks in predicting how hydraulic fluids are going to perform in the real world.

For example, ASTM D943 was designed to measure oxidation potential by recording the change in Total Acid Number (TAN). The test evaluates the oxidation stability of hydraulic oils in the presence of oxygen, water, copper and iron at an elevated temperature over a period of time. While this method does reveal some information about the oil, it ignores the fact that few hydraulic fluid failures occur as a result of oxidation and high TAN. In fact, most hydraulic fluid failures result from contamination, which renders the ASTM D943 an ineffective measure of how hydraulic fluids will operate in actual hydraulic equipment.

Similarly, ASTM D4310 repeats some of the same methodology errors as ASTM D943 because it is simply a modification of the original test. It measures the weight of the insoluble material formed over a period of 1,000 hours and the total amount of copper in the oil, water and sludge phases. While this does begin to account for contamination and sludge build-up, no correlation has been found between the test results and overall oil life under real world conditions.

As a close examination of these two bench tests has shown, neither of the legacy tests provides an accurate picture of overall oil life for end users, which is why it became clear to engineers that a new test must be developed. After all, end users were using the information produced by these tests to decide which hydraulic fluids to use in their equipment. Fortunately, the A2F10 Piston Pump Test now exists to provide better information about what the overall oil lifetime will be.

How the A2F10 Pump Test Advances the Field

The A2F10 Piston Pump Test has been in existence for nearly two decades. First introduced in 2004 by the Japanese Construction Machinery Association (JCMAS), the test was developed to indicate oil service life of hydraulic fluids in construction equipment.  Unlike other hydraulic pump tests, the A2F10 does not measure wear protection but instead shifts to testing the sludging, oxidation and corrosion performance. Here’s how it works.

The A2F10 is a bent axis axial high-pressure piston pump, through which 13 liters of hydraulic fluid are circulated. The fluid is subjected to a pressure of 5,000 pounds per square inch (PSI), a temperature of 80 degrees Celsius (°C) and a speed of 1,500 revolutions per minute (rpm). Sixty meters of copper catalyst are placed in the sump and air is added to the system at a rate of 1 liter per hour (L/h) to speed up oxidation. Researchers take samples of the fluid at regular intervals (typically every 100 hours) up to the test limit of 500 hours and assess them on seven different parameters each time. The hydraulic fluid must fall within the designated limits at each time interval. If it falls outside of the key parameters at any point over the 500 hours, the fluid is considered to have failed the test.

In designing the test, engineers created conditions such that 500 hours in the pump test correlates to 2,000 hours in real-world hydraulic equipment. For users, it’s important to note that the oil drain interval (ODI) can be projected as being four times the passing hours in the test. The longer the fluid successfully passes the A2F10 test, the longer the ODI will be in the real world, thus reducing the TCO of a piece of equipment. For some hydraulic fluids, that means they can last up to 8,000 hours in the field between oil replacements.

The hydraulic market will continue to grow and evolve as it has over the past decade. As a result, customers are increasingly interested in extending ODIs to reduce costs over the lifetime of the equipment. They rely on the testing done by the OEMs, lubricant manufacturers and oil marketers which must accurately reflect how the fluid will perform under real-world conditions. Unfortunately, legacy tests like ASTM D943 or ASTM D4310 don’t provide the proper information necessary to draw conclusions about oil lifetimes and in-service field performance.

That’s why the A2F10 Piston Pump Test has become an invaluable method of measuring real-world results. Instead of evaluating wear, the A2F10 test focuses on measuring sludging, oxidation and corrosion performance. Those criteria more closely reflect what happens in actual hydraulic equipment and thus are more helpful to end users as they try to decide which hydraulic fluid to use.

This data and connectivity are no longer an option for OEMs but a requirement.
Lori Ditoro
January 9, 2023
Latest
Hydraulic Fluid

Poclain Hydraulics announced at INTERMAT its group of companies will now fall under the name Poclain to better unify the expertise of its subsidiaries into a singular brand name.
Poclain Hydraulics Inc.
April 29, 2015
Hydraulic Fluid

Testing conducted by Eaton has found HEES certified synthetic biodegradable hydraulic fluids are safe to use in the company's Geroler motors and offer many benefits over standard petroleum lubricants.
Eaton
September 2, 2014
Fluid Power

Presentations from Evonik during IFPE 2014 will focus on hydraulic fluid use in hybrid vehicles, and the use of energy-efficient hydraulic fluids to help reduce GHG emissions in off-highway equipment.
Evonik Oil Additives USA, Inc.
February 28, 2014
Hydraulic Fluid

How to keep your cool while loading ‘molten lava’

Liquid slag extraction can look like something out of a volcanic disaster movie, with red-hot ‘molten lava’ being transported by machines with bullet-proof glass – reinforced in case of an explosion – in extreme temperatures.
Volvo Construction Equipment
July 23, 2012

A look into the niche market of biodegradable, environmentally friendly hydraulic fluids that are also fire-resistant for high temperature situations such as tunnel boring equipment and the slag industry.
Michelle Kopier
August 1, 2011

The first of a two-part course focused on ways to maximize hydraulic system reliability.

Wandfluh introduces a proportional directional control valve with an integrated spool valve for use in mobile hydraulics.
Wandfluh of America, Inc.
May 12, 2011