After several lackluster equipment solutions in an attempt to increase power for crawler tractors, Euclid designed a vehicle from the ground up to handle the output and weight of two powertrains. 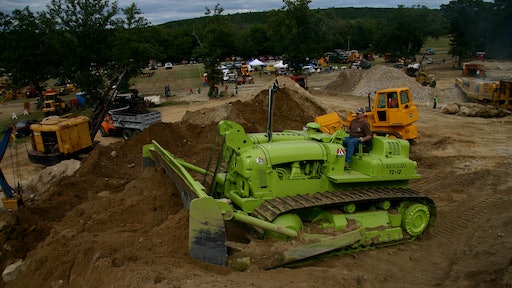 The oscillation of the TC12’s two chassis is apparent on this beautifully restored 1964 example owned and operated by HCEA Second Vice President Earl Fitzgerald at the HCEA’s 2010 International Convention and Old Equipment Exhibition in Richmond, RI.
HCEA Archives

The previous column, The Dual D9 (read online, 20858662), illuminated how Buster Peterson combined two Cat D9Gs end-to-end to create a single pushloading tractor with twice the power, and touched on the earlier idea of creating a single, more powerful crawler tractor by combining two machines onto one undercarriage.

Peterson and several contractors tried the single undercarriage concept in the late 1940s and early 1950s with Cat D8s and, in at least one instance, Allis-Chalmers HD19s. The resulting machines were nearly twice as wide as single tractors, and could handle more material in dozing applications because the doubled horsepower was applied to custom-designed extra-wide dozers.

But while dirt handling capacity and pushloading power increased markedly, these tandem tractors were cumbersome to operate and clumsy to maneuver. They also brutalized their undercarriages, which were designed to handle the weight and power of one powertrain, not two.

The Euclid Division of General Motors had the most successful solution to this design concept with its TC12 crawler tractor. Unlike the experimental Cat and Allis-Chalmers tandem tractors, it was designed from the ground up to handle the output and weight of two powertrains.

Where the earlier tandems were mounted on double-width rigid frames, each engine and drivetrain on a TC12 was mounted on an independent chassis, and the two chassis were joined by a crossbeam that allowed them to oscillate against each other on uneven ground.

In addition to being the first commercially produced twin-engine crawler, as well as the world’s most powerful crawler tractor in its early years of production, the TC12 was also the most maneuverable large tractor in the world. With each crawler powered by one of the two GM 6-71 diesels, one track could be counter-rotated against the other to spin the machine on its central axis.

It also had power shift and a torque converter, which made the flow of power to the crawlers more consistent and efficient. All in all, it was an easier machine to operate than a conventional large crawler with steering brakes and gear shift.

The first prototype was developed in 1954, and the first machines were sold later that year. The design underwent numerous mechanical and cosmetic modifications, and a total of 901 TC12s and successor 82-80s were produced until the model was discontinued by Terex in 1974.

For all its advances, the TC12 had several drawbacks. While narrower than the experimental tandems, it still had to be disassembled for highway transport. Anticipating this, the Euclid engineers made the process a simple matter of properly blocking the two chassis in place and removing the crossbeam.

The TC12’s complexity was its undoing. If kept in good repair, it was very productive at ripping and dozing. But not every owner had the means to do this, and deferred or improper maintenance soon resulted in very high repair costs. Moreover, unlike the Cat D9s that were introduced in 1956 as a smaller, single-engine competitor, the TC12 did not hold its value in the used equipment market.

The Historical Construction Equipment Association (HCEA) is a 501(c)3 non-profit organization dedicated to preserving the history of the construction, dredging and surface mining equipment industries. With approximately 4,000 members in twenty-five countries, our activities include publication of a quarterly educational magazine, Equipment Echoes; operation of National Construction Equipment Museum and archives in Bowling Green, OH; and hosting an annual working exhibition of restored construction equipment.

The 2017 HCEA show will be November 3-5 at the Ederville Train and Tractor Show, Carthage, NC, USA.