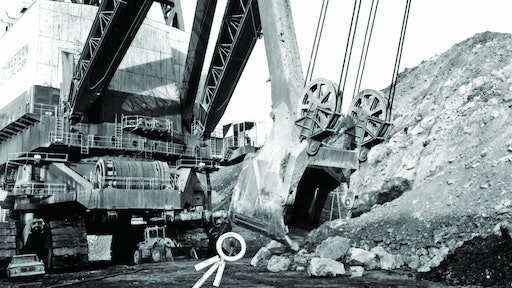 The biggest of the big: Marion’s 6360 The Captain, the largest power shovel ever built and the world’s largest land-based mobile machine until even heavier bucket wheel excavators were introduced in Germany in 1978. Note the wheel loader under the power cord takeup reel, and – if you can see them – the walking man (circled) and the operator in his compartment.

Strip mining requires massive amounts of excavation, and power shovels were developed on a scale commensurate for the work. The stripping shovel was designed to remove shallow layers of overburden, using a lengthened boom and dipper stick that enabled it to dig from a higher face than a conventional shovel and to discharge spoil to a pile outside the pit. The first American-built stripping shovel was built in 1910; it weighed 90 tons and wielded a 1-1/2 cubic yard bucket. A series of design innovations led to remarkable increases in size and capacity; we’ll look at some of these innovations in future columns.

In the 1950s, increased demand for coal created a need for more efficient overburden removal from mines, leading to the development of a new generation of stripping shovels – the super strippers. Several of these shovels were the largest land-based mobile machines in the world at the time of their introduction or assembly. Built in 1955, the 2,750-ton, 60-yard Marion 5760 Mountaineer was the first super stripper. The design culminated in 1965 with another Marion shovel, the model 6360. Named The Capitan after the Southwestern Illinois Coal Corporation mine where it worked, the 14,000-ton, 180-yard giant was the largest power shovel ever built; among land-based mobile machinery, only some more recent bucket wheel excavators are heavier.

Few super strippers were built, for three reasons. Stripping equipment was designed and ordered for the desired output of a mine; once operating, the status quo was usually maintained for years to come. Second, some super strippers were stored for several years at a time, then reactivated as market conditions demanded, so some survived for thirty or more years. Third, a super stripper could move a prodigious amount of overburden, given its dipper size, the distance material was moved, and long-term non-stop operation on a fairly quick cycle. The Capitan excavated 810,000,000 cubic yards, twice the volume of the Panama Canal, until retirement in 1991.

The Historical Construction Equipment Association (HCEA) is a 501(c)3 non-profit organization dedicated to preserving the history of the construction, dredging and surface mining equipment industries. With over 4,300 members in twenty-five countries, our activities include operation of National Construction Equipment Museum and archives in Bowling Green, Ohio; publication of a quarterly magazine, Equipment Echoes; and hosting an annual working exhibition of restored construction equipment.

Individual memberships are $30.00 within the USA and Canada, and $40.00 US elsewhere. We seek to develop relationships in the equipment manufacturing industry, and we offer a college scholarship for engineering students. Information is available at www.hcea.net, or by calling 419-352-5616 or e-mailing info@hcea.net.