CEMA reports the business index of the agricultural machinery industry in Europe continues to be at its highest level since 2012. 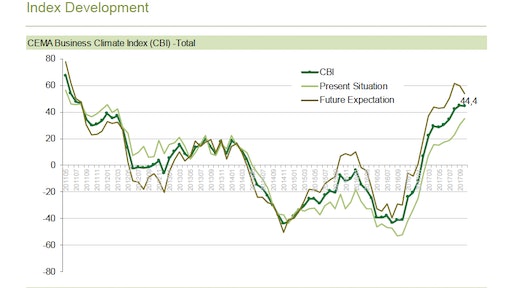 The business index of the agricultural machinery industry in Europe keeps on its highest values since 2012. Future business expectation has become slightly more cautious while current business evaluation has further improved.

The tractor industry is less euphoric than the rest of the agricultural machinery industry with both future and current evaluation below the industry average. Harvesting equipment current business shows a worsening, but for the first time future expectations are more positive than the average of the industry.

As regards order intake, those from outside Europe are considerably more dynamic than those from Europe. This applies by far the clearest for the tractor segment.

Furthermore, in all European markets the majority of surveyed companies expect turnover increases in the next 6 months. Germany is now among the top markets. However, if considering only tractors, arable and harvesting equipment, Germany is rather midfield. In contrast, Poland has further climbed up the ranking across all segments. Also Belgium which was for a long time on the bottom of the ranking seems to be recovering now. In the Southern areas affected by drought the situation is mixed: Italy is further slipping down, on the opposite Spain seems to stabilize again.