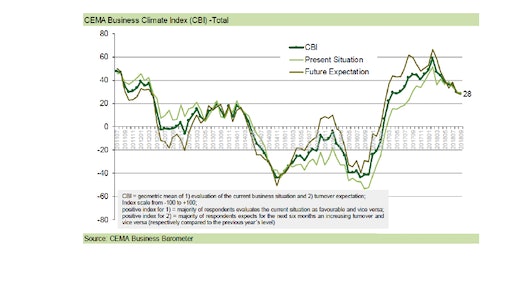 In the first half of 2018, tractor registrations in Europe decreased by around 5% compared to the first half of 2017. A total of 69,260 agricultural tractors were registered in the first half of this year in the 30 countries1 from which CEMA receives the information. Still, this figure does not give the full picture. Sales dropped particularly in the first quarter while demand in the second quarter of 2018 remained stable in comparison with the second quarter of 2017. This is to a certain extent the result of a peak in tractor registrations in December of last year, caused by the introduction of new EU legislation as of January 1, 2018. Tractors not meeting the new requirements of the legislation had to be registered or placed on the market before the introduction date, resulting in a high number of pre-registrations at the end of 2017.

The comparison between tractor registrations in the period July 2017 – June 2018 with those in the period July 2016 – June 2017 shows a significant increase of around 10%. Moreover, the increase in the number of tractor sales in December last year is significantly higher than the decrease in the first half of 2018. This makes it complicated to draw clear conclusions on the development of the tractor market in the first half of 2018. However, there seems to be a positive trend.

The CEMA countries2 show mixed signals in the first half of the year (6 months). The tractor registrations in the two biggest markets France and Germany decreased by around 12%. The Austrian, Danish, Italian and Spanish markets also shrank by, respectively, 4%, 13%, 5% and 9%. In the other CEMA markets there was a growth of 19% in Belgium, 11% in the Netherlands and 5% in the UK. Still, in all these countries there was growth in the last 12 months (July 2017 – June 2018) compared to the previous 12 months (July 2016 – June 2017). It is not clear what the impact is of the introduction of the European legislation in each country, making it complicated to get a clear country-specific picture.

Taking into account all types of agricultural machinery, there is a positive mood in the agricultural machinery market. Yet, the business climate is slightly deteriorating from a high level according to the CEMA Business barometer. It seems that the peak in optimism was several months ago.

The CEMA Barometer is a monthly survey sent to the European agricultural machinery industry and covering all major product categories. It provides a regular overview of the business mood based on current business sentiment and the expected turnover in the next 6 months.