Visitors vastly exceeded the threshold of 300,000 mark, increasing 11% from the last edition of the show. 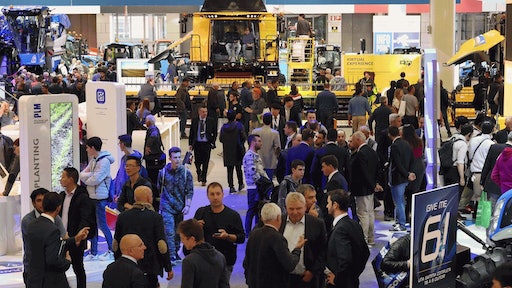 The 43rd edition of EIMA International, the review of agricultural machinery organized by FederUnacoma at the Bologna exhibition center, ended yesterday afternoon (Nov. 11)  with extraordinary numbers. Visitors reached the figure of 317,000, an increase of 11% compared to the result of the last edition (2016), which had already set a historical record for this event, which takes a leading role not only in the agricultural machinery sector but in the general exhibition scene, worldwide. The number of foreign operators also increased - over 50,000 with an increase of 15% compared to the last edition - from 150 countries, for an event that saw the participation of 1,950 exhibiting industries and occupied a gross surface area of 375,000 sq. m.

"It is a great success for our Federation and for the Bologna Fair," declared the President of FederUnacoma Alessandro Malavolti. "But above all for the agricultural machinery industries, a sector that surprises for its technological level, while it enters the collective imagination as a symbol of progress and civilization."

"These machines are increasingly powerful and at the same time increasingly refined and sensitive to the environment and to safety, and they attract a crowd of young people, never as numerous as in this edition."