Class 8 Truck Market in Cyclical Trend, Even with Regulatory Impacts 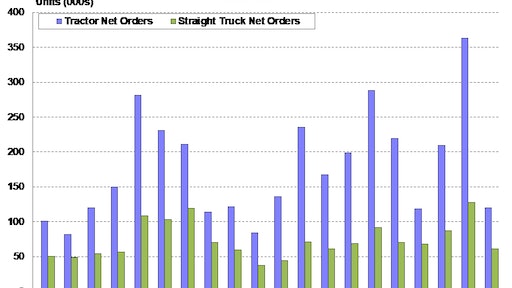 According to ACT’s latest release of the North American Commercial Vehicle OUTLOOK, over the past decade, the U.S. Environmental Protection Agency (EPA) shifted its focus from the tailpipe to fuel economy. On January 6, the EPA released an Advanced Notice of Proposed Rulemaking (ANPR), which promises the return of demand altering regulations that target tailpipe emissions. On top of normal cyclicality is the expectation that the California Air Resources Board (CARB) and EPA ANPRs will ultimately transition into (potentially expensive) demand-swinging regulations in the coming decade.

“As illustrated in the Class 8 net order chart, even without regulatory avoidance, the feast-and-famine nature of the business is alive and well,” says Steve Tam, ACT’s Vice President.

He elaborates, “Given that freight is by nature cyclical, it goes to follow that carrier profitability is impacted in turn, and history shows a strong relationship between truckers making money and buying equipment.”

Tam adds, “That relationship hinges on taxes and opportunity: At freight cycle peaks, truckers spin-off much free cash, so willingness and ability to buy rise.”