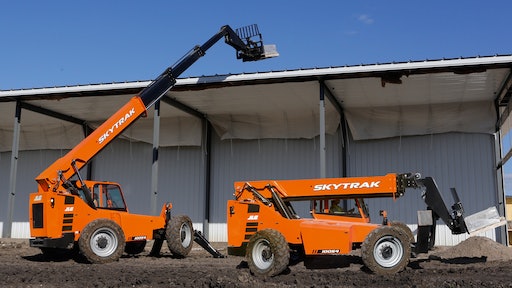 JLG Industries Inc., an Oshkosh Corporation company and a leading global manufacturer of aerial work platforms and telehandlers, was named a 2017 winner in EquipmentWatch’s annual Highest Retained Value Awards program, the industry’s only award based on residual values for heavy equipment. JLG engine-powered articulating boom lifts, engine-powered scissor lifts, and SkyTrak telehandlers received this honor as the model series projected to retain the highest percentage of its original value after 5 years among all competitors in the articulating boom lift, internal combustion scissor lift, and telehandler categories.

“Total cost of ownership is of increasing importance to equipment owners working to maximize their return on investment in a piece of equipment,” says Paul Kreutzwiser, Global Category Director – Aerial Work Platforms, JLG Industries, Inc. “In addition to acquisition costs and resale value, many factors affect total cost of ownership, such as maintenance, service, parts, training, machine reliability, and machine versatility. JLG strives to manufacture equipment that provides excellent value over its life cycle, and the EquipmentWatch award recognitions reinforce that commitment to our customers.”

“The Highest Retained Value Award is indicative of excellence across a manufacturing organization,” says Garrett Schemmel, Vice President of EquipmentWatch. “Product quality has the most obvious impact on an asset’s performance on the secondary market, but residual values are also highly impacted by brand affinity and fair original pricing. A manufacturer must excel on all three fronts in order to gain recognition as a Highest Retained Value Award winner.”

For purchasers of equipment, one of the most influential factors in the buying decision process is residual value. An asset’s residual value will have a significant impact on leasing terms and lifetime ownership costs. Informed buyers do well to weigh value retention heavily when considering equipment acquisition.

To create the 2017 Highest Retained Value Awards, EquipmentWatch analysts considered 12,536 models in their valuation database, which were then narrowed down to 156 series from 36 brands. Once the finalists were set, residual values were calculated at the series level by leveraging a database covering more than $412 billion in market activity in order to identify the winner in each category.