CNH Industrial participated in the China-Italy Business Forum discussing the growing relationship between the company and China due to its growing market potential. 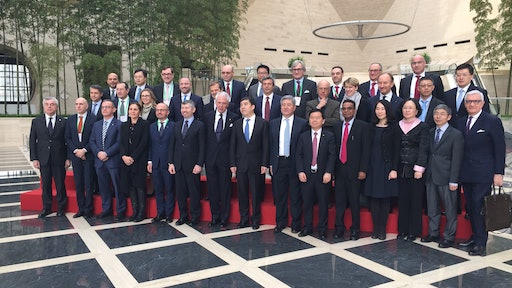 CNH Industrial was invited to participate in the fourth edition of the China-Italy Business Forum held February 22, at the Great Hall of the People in Beijing, China. This year’s Forum saw the presence of Xi Jinping, President of the People's Republic of China, and Sergio Mattarella, the President of Italy, who both made addresses. Also in attendance were many high-ranking officials from both countries, including the Italian Undersecretary of Economic Development Ivan Scalfarotto and his Chinese Counterpart, Zhou Xiaoyan General Director of MOFCOM, Ministry of Commerce of the People's Republic of China.

Established in January 2014, this year’s forum served as an opportunity for a number of meetings between companies from both countries to discuss potential opportunities in various markets, from infrastructure, agriculture, green technology to sustainable urban development.

As a major industrial player in both markets, and newly appointed member of the forum’s Executive Council, CNH Industrial, represented by Michele Lombardi, Head of Iveco for Asia Pacific & President of Iveco China, took the opportunity to discuss the importance of the growing relationship between CNH Industrial and China which is playing an increasingly important role, with great market potential. CNH Industrial was one of the first foreign manufacturing companies to enter China, with its Case IH and Iveco Brands, and this country has always been an important part of the company’s global strategy. Case IH entered the market at the beginning of the last century when the first tractors were imported to China, and Iveco was the first foreign commercial vehicle manufacturer to enter the Chinese market in the 1980s.

CNH Industrial continues to develop its presence and expertise in China through projects focusing on innovative technology and reinforcing its market leading positions in the agricultural sector with its Case IH and New Holland Agriculture brands and in the construction sector with Case Construction Equipment. This is coupled with its pioneering global role as sustainable transport provider with Iveco commercial vehicles and FPT Industrial fuel-efficient engines, including a wide range of natural gas powered solutions.

The company remains committed to its contributions to China’s economy through the further development of its joint ventures and increase in productivity at its manufacturing plants. The company aims to transport its success and sustainability into the Chinese market through a number of projects including localization of investments in the development of advanced equipment, the promotion of alternative fuels and the development of sustainable mobility.