The 25,000th machine is an electric G2200E X-TRA and was produced at the company's facility in Oisterwijk. 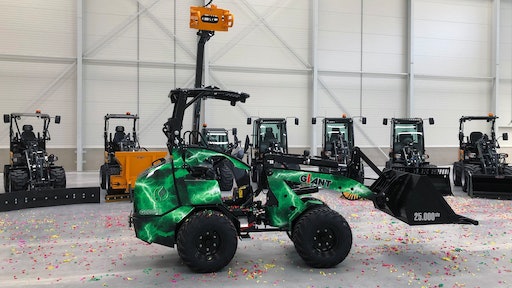 Hard work, flexibility and intensive cooperation are core values that are synonymous with the business operations of TOBROCO-GIANT. It says a lot that precisely during this period production continued and the 25,000th machine rolled off the production line. This milestone could not have happened without these values and the involvement of employees, dealers and suppliers. Normally this would be celebrated extensively, but given the circumstances, this needs to wait till later.

The 25,000th machine is an electric G2200E X-TRA and was produced in Oisterwijk last week. It is not surprising that it concerned an electric machine, since the demand for electric wheel loaders is only increasing. The G2200E X-TRA is a special edition with a unique color scheme and was handed over to E-Den Hartog. A new company from GIANT dealer Den Hartog Bouwmaterieel, which is specially focused on the sales and maintenance of electrical machines.

It has taken TOBROCO-GIANT 20 years to reach this milestone. After its foundation in 1996, the first wheel loader was built in 2001. There were still limited numbers in the first years, but upscaling started in 2003. The production moved from a tent in Haaren to a commercial building in Oisterwijk. The 10,000th machine was built in 2014 by expanding the number of models and adding telescopic loaders and telehandlers to the product range.

In the following years, the dealer network was expanded further to 580 dealers in 50 countries and a sales office was opened in America. This, together with the high demand for multifunctional GIANT machines, has resulted in another 15,000 machines being built in the past 6 years. A number that will only increase faster due to the investments made in expanding production and a new warehouse. At the end of this year, 8,000 m2 of production and the high-rise warehouse will be taken into use. This expansion gives the opportunity to build larger machines and aims to more than double production by 2025 compared to this year. The goal is to build 8,750 machines by that year.

However, the investments are not only made in the Netherlands. In Hungary, the factory is also being prepared for growth in the coming years. The frames are manufactured in Eger, after which they come to the Netherlands to be sprayed and go into production. In addition, since the start in 2013, the attachments have been produced here. The factory has been expanded with 2,000 m2 of production space and investments have been made in two welding robots, laser cutters and press brakes.

The future is electric

The G2200E and G2200E X-TRA are 2.2 ton wheel loaders and the first electrical machines to be built by TOBROCO-GIANT. Given the demand for compact electrical equipment, it is a trend that cannot be stopped anymore. Director Toine Brock: “We expect that in some time half of the number of compact machines will be electric. At the moment most machines go to countries such as the Netherlands, Norway, Denmark and Sweden. But we are seeing stricter rules on emissions in more and more countries. At some point the EU will set rules for Europe and the rest of the world will have similar rules as well.”

“Our customers specifically request electrical machines, which is why we want to have a diesel and electric version of every GIANT available in the long term. I expect that by 2025, 40% of our production will consist of electric (telescopic) wheel loaders. In time, customers can expect an electric skid steer and telehandler as well.”

“This year we will start developing electrical machines in the 1.5, 2.5 and 3.5 ton class. With Jungheinrich, we have found a global and reliable partner with the best knowledge when it comes to developing electrical machines. They supply the electric motors and the battery pack and the hardware and software is developed in-house. This gives us the opportunity to combine the best of both worlds and develop machines that ensure low running costs and a high working speed.”