The purpose-built mail and package delivery vehicles will be equipped with either fuel-efficient engines or battery-electric powertrains. 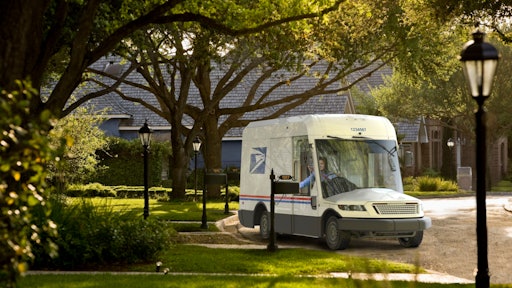 The Next Generation Delivery Vehicle will include enhanced ergonomics and visibility.
U.S. Postal Service

The U.S. Postal Service (USPS) has awarded Oshkosh Defense, a subsidiary of Oshkosh Corp., a contract to produce its Next Generation Delivery Vehicle (NGDV). This is the first large-scale fleet procurement USPS has undertaken in three decades.

According to Oshkosh Defense, the competitively awarded contract allows for delivery of between 50,000 and 165,000 vehicles over 10 years.

"We are honored to have been selected by the USPS to support their important work by manufacturing American-made Next Generation Delivery Vehicles that will connect every home and business across the United States for decades to come,” said John Pfeifer, President & Chief Operating Officer, Oshkosh Corporation, in a press release from Oshkosh Defense about the contract.

USPS says in its press release announcing the contract that the investment is part of a soon-to-be-released plan which aims to transform its financial performance and customer service through investments in people, technology and infrastructure. Per the press release, the Postal Service seeks to become the preferred delivery service provider for the American public.

USPS says under the contract's initial $482 million investment, Oshkosh Defense will finalize production design of the NGDV. This includes initiation of engineering efforts to finalize the vehicle design, as well as tooling and factory build-out activities to enable production of the NGDV.

The NGDV is purpose-built for right-hand drive mail and package delivery. It will be equipped with either fuel-efficient internal combustion engines or battery-electric powertrains to help upgrade the USPS fleet to be more sustainable. USPS says the intent is to also enable the vehicle to be retrofitted so new powertrain technologies can be used as they become available.

Additional features of the vehicle will include air conditioning and heating, as well as improved ergonomics. The NGDV will also feature advanced vehicle technologies such as:

“Our century-long history of delivering products to customers, operating in some of the most demanding and severe conditions on the planet, uniquely positions us to bring exceptional reliability, safety, and maintainability to USPS’s Next Generation Delivery Vehicles,” said John Bryant, Executive Vice President, Oshkosh Corporation, and President, Oshkosh Defense, in the company's press release. “Partnering with trusted suppliers, we have developed a purpose-built solution to support the current and future needs of the USPS.”

USPS has over 230,000 vehicles in its fleet of various class types. It intends to replace and expand this fleet, which includes vehicles that have been in service for over 30 years, with the NGDV as well as commercial-off-the-shelf models.

According to Postmaster General and USPS Chief Executive Officer Louis DeJoy, the NGDV program will help expand the Postal Service's ability to handle more package volume. In addition, inclusion of cleaner technologies within its fleet will support the health and comfort of mail carriers and the communities they serve.

“Our fleet modernization also reflects the Postal Service’s commitment to a more environmentally sustainable mix of vehicles,” DeJoy said when announcing the contract. “Because we operate one of the largest civilian government fleets in the world, we are committed to pursuing near-term and long-term opportunities to reduce our impact on the environment.”

Per the USPS press release, the Postal Service awarded the Oshkosh Defense contract in accordance with competitive Postal Service procurement policies after extensive testing of prototype vehicles, evaluation of offered production proposals, and discussions of technical specifications with the offerors.

USPS says the first NGDVs are estimated to appear on carrier routes in 2023.

*Information based on press releases from Oshkosh Defense and the U.S. Postal Service.