The Shippers Conditions Index fell to a reading 0.4 in March, but is expected to remain positive until late in the year. 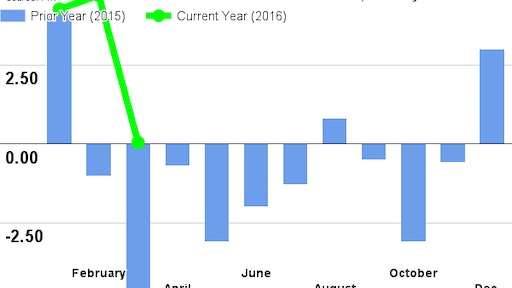 FTR’s Shippers Conditions Index (SCI) fell to a near neutral reading of 0.4 in March after improving for each of the four previous months. The risk of diesel prices rising has put pressure on the fuel cost component of the index, reflected in the current month’s decline. However, the SCI is expected to remain in positive territory at least until late 2016 as the weakening of freight conditions continues to favor the shipper.

The SCI is a compilation of factors affecting the shippers transport environment. Any reading below zero indicates a less-than-ideal environment for shippers. Readings below -10 signal conditions for shippers are approaching critical levels, based on available capacity and expected costs.

Jonathan Starks, Chief Operating Officer at FTR, comments, “Demand for trucking and rail services has been sluggish so far in 2016. The upside for shippers is that capacity has loosened relative to where it has been over the last couple of years, and some contract rate negotiations have shown sizable declines. Anecdotes indicate as much as a double-digit drop in base contract rates, although the data that we track show negative pricing in the dry van market is generally offset by merely weak pricing in other segments. The high inventories that are persisting in the retail supply chain seem to be impacting the dry van market much more significantly. We are nearing a point in time where the chance of another round of capacity shortages would bring even more pressure to build inventories. At the same time, macroeconomic forces could weaken sales enough to kick off a traditional round of inventory reductions. Maintaining adequate stock levels under these countervailing pressures will test the best logistics functions.”