Some European markets experienced significant growth in 2016 for arable farm equipment while others saw declines; for Europe as a whole sales decreased 2%, but stable demand is expected for 2017. 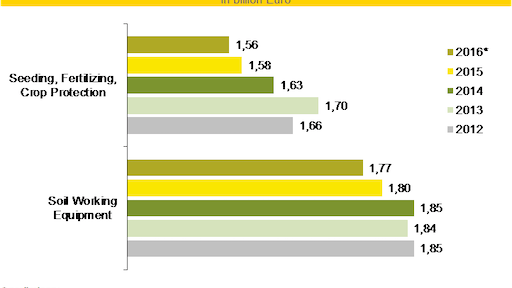 Market Volume for Arable Equipment in the European Union in billions of Euro.
CEMA, VDMA

The decline in sales of arable farm equipment in Europe slowed down in 2016 and is expected to come to a halt this year. According to provisional calculations, sales in 2016 totaled EUR 3.33 bn, a decrease of -2% compared to 2015. For 2017, the industry believes the market will stabilize once again in Europe and could even grow by 1%.

“The European market for arable farm equipment in 2016 is a picture full of contrasts,” says Nina Janßen, Coordinator of the CEMA Product Groups of leading manufacturers which met in the French city of Saverne at Kuhn S.A. on March 7 and 8, 2017. Some Eastern European markets, particularly Russia and the Ukraine, enjoyed significant growth rates, especially in sales of field sprayers and precision seed drills. Growth in these markets partially compensated the decline of orders from other countries. Massive declines in sales were recorded for France and Poland – for very different reasons: in France, a poor harvest caused liquidity shortages among farmers while in Poland blocked subsidy payments exerted a negative impact on farmers’ ability to invest in new arable equipment.

For members of the Product Group “Soil Working Equipment” chaired by Mattias Hovnert (Väderstad), major technology drivers are the trend towards larger machines, wider working widths as well as the growing inclusion of electronics and digital technology into the equipment. The overall aim is greater user-friendliness and efficiency. After declining sales in 2015, sales of compact disc harrows and milling machines increased by 4% and 3% respectively in 2016. These increases are considered as signs of a modest recovery, which, however, has not yet reached other products in the category such as ploughs and harrows.

Manufacturers in the Product Group “Sprayers” chaired by Christoph von Starck (Horsch) underlined the growing size of machines as well as the sensitivity to ecological agriculture (Organic Farming) as important aspects. The European sprayers market fell by -8% in 2016. Germany remains the largest market for field sprayers despite a decline of -24%. The group also discussed progress in the development of a new web tool called STEP-water (technologies for water protection when using field sprayers) which will be officially launched later this year.

Fifteen manufacturers are part of the Product Group “Seed Drills, Precision Seed Drills and Fertilizer Spreaders” chaired by Massimo Bergo (Maschio). After a significant market decline in 2015 (-28%), the market for pneumatic precision seed drills increased again by +3% in 2016. Here, the Ukraine and Russia are the top-performing markets. In these countries, especially the size of the equipment, measured in numbers of rows per device, is significantly higher than in other European countries.

The CEMA Product Groups are alliances of the leading European manufacturers of arable equipment implements as well as tractors and combine harvesters. The main focus is placed on the joint assessment of the market based on dedicated statistics. Currently, 20 companies from nine European countries are members of the CEMA Product Groups in the field of arable equipment implements. Prerequisite for participation is the membership in a national industry association, which belongs to the European umbrella association CEMA.