What's in the Bipartisan Infrastructure Package...And How Will We Pay For It?

In a rare Sunday session, lawmakers introduced the $1.2 trillion, eight-year infrastructure bill after negotiators worked through the weekend. 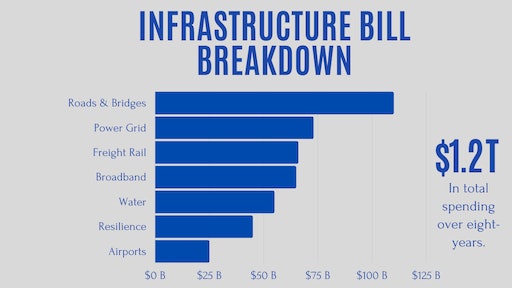 The wait is over. After months of delay, Senators unveiled a $1.2 trillion, eight-year infrastructure bill during a rare Sunday session after they worked through the weekend.

According to The Hill, the 2,702-page bill, spearheaded by Sen. Rob Portman (R-OH), Sen. Kyrsten Sinema (D-AZ.) and a larger group of roughly two dozen negotiators, is substantially narrower than the multitrillion-dollar plan envisioned by President Biden earlier this year but the legislation would authorize more than half a trillion dollars in new spending to bolster the country's roads, bridges and other physical infrastructure.

Circulation of the legislative text to Senators comes after the bipartisan group of negotiators and the White House announced last week they reached a deal on the details of the bipartisan infrastructure bill, capping weeks of negotiations over the framework announced by President Biden in June.

Supporters of the bill are hopeful that they can pass the measure by the end of the week.

What's In the Bill?

While the Infrastructure Investment and Jobs Act or IIJA is seen as a compromise to some, the bill would spend big money on highways, transit, rail and more. Politico says it will still likely frustrate progressives, who are pushing for policy priorities like “fix it first” for highways and the broader climate goals of the House’s surface transportation bill.

The bill also features a $118 billion bailout of the Highway Trust Fund from the Treasury’s general fund, essentially an inevitability given lawmakers’ inability to agree on user-fee reforms or increases, but one that has largely gone under the radar and was slipped into the bill text at the last minute.

The IIJA adds $550 billion in new spending over five years on top of current FAST Act funding levels by incorporating the $303.5 billion highway bill (Surface Transportation Reauthorization Act of 2021) passed unanimously by the Senate Committee on Environment and Public Works in May.

While the full legislative text of the ILJA is not yet available, a fact sheet released by the White House provides an overview of the new funding it contains:

How Will We Pay for This?

One of the largest hold ups in Washington was agreeing what would be in the package and how to pay for it. According to the Associated Press, here’s a breakdown of pay-fors in a Republican summary of the plan:

Stay tuned for news on a vote later this week.