AEM receives an award from the U.S. Department of Commerce for its work in promoting trade opportunities. 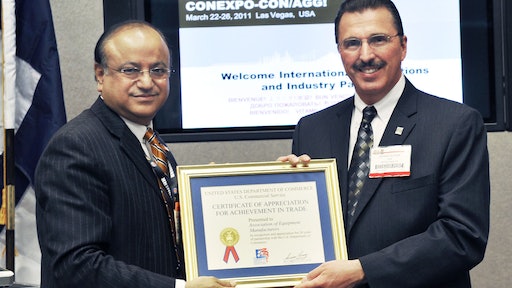 The Association of Equipment Manufacturers (AEM) has received the U.S. Department of Commerce's "Certificate of Appreciation for Achievement in Trade" in recognition of its work with the department to promote U.S. export development and create opportunities for U.S. businesses through trade.

AEM President Dennis Slater accepted the award on behalf of the association from Suresh Kumar, Assistant Secretary of Commerce for Trade Promotion and Director General of the U.S. and Foreign Commercial Service, during ceremonies at the recent CONEXPO-CON/AGG exposition in late March in Las Vegas.

AEM has been a strong partner of the U.S. Department of Commerce for more than 30 years, and it is an active participant in the Department’s U.S. Commercial Service’s International Buyer Program for AEM-run shows such as CONEXPO-CON/AGG and AG CONNECT Expo.

"AEM is an outstanding example of how our collaborative partnering efforts are enhancing export opportunities for U.S. construction and agricultural equipment suppliers," Kumar says. "President Obama's National Export Initiative aims to double U.S. exports by 2015 while supporting millions of U.S. jobs, and trade shows such as CONEXPO-CON/AGG 2011 are a key to helping us achieve this goal."

At CONEXPO-CON/AGG 2011 and the co-located IFPE 2011, international registrations accounted for a record 24% of the total of nearly 120,000 registered attendees, representing more than 150 countries. The shows hosted 42 official international customer delegations from 37 countries, organized by the U.S. Department of Commerce as well as in-country associations and related groups.