Two pieces of New Holland Construction equipment are being used to help solve the mystery of the real Mona Lisa. 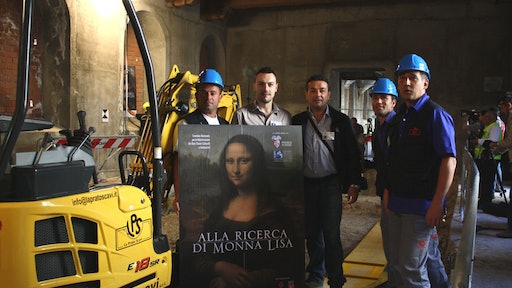 The mystery surrounding the subject of the world's most famous painting may be close to being solved with a little help from a New Holland E18SR rotating mini-excavator and a C175 compact tracked mini-shovel.

It all started with the most mysterious and fascinating portrait in the world, the Mona Lisa, and the claims of Giorgio Vasari who, sometime around 1550 identified Mona Lisa Gherardini as Leonardo's model. According to Vasari, she is the one portrayed in Leonardo's masterpiece commissioned by her husband, Francesco del Giocondo.

Were it not for the hypnotic powers of the legendary smile and the resulting worldwide success of an all-time best seller, it would be little more than a simple historical curiosity or a scholarly pursuit.

When the tattered death certificate that indicated Lisa's burial site was found in 2007 in the St. Lawrence Basilica of the Florentine convent of Sant’Orsola, the world looked on with baited breath.

Inevitably, amidst everyone's burning curiosity, the order was given to begin excavation work to recover the body. By carefully recovering the remains with special attention to the skull, a computerised portrait of the woman's face will be created and compared with the portrait in the masterpiece housed in the Louvre, prior to comparison with the DNA of the remains of the Gherardini children buried in another Florentine church.

The very first investigations were conducted with Georadar that verified the presence of relics up to a depth of three to four metres in the two cloisters and in a church of the former Florentine convent.

This is where the New Holland Construction equipment excavator with hammer came in to clear away a 36 centimetre layer of reinforced concrete put down in the 1980's for building a barracks. The site was then prepared for a proper archaeological dig that began 11 May under the direction of the company La Prato Scavi and assisted by an E18SR rotating mini-excavator and a C175 compact tracked mini-shovel.

The New Holland mini excavator conducted precision excavation within the walled niches containing cemetery urns (known as loculi) in which the Surintendence had determined that no relics of archaeological interest would be found. In those loculi in which they thought remains might be present, the Prato firm proceeded by hand. The excavator meanwhile remained at the ready to be able to remove the earth that was loaded with the shovels into the bucket and brought to the edge of the digs.

The mini excavator was also chosen for its variable (98 to 132 mm) track and working clearance of 2120 mm that enables operation in very tight spaces without worrying about what may happen behind, thanks to a rear rotating radius of zero. This is ideal for being able to move with no problems within the historical building.

Andrea Toparelli, proprietor of La Prato Excavation says that, “the first day, surrounded by so many telephoto lenses and television cameras from all over the world, we were all quite excited. But everything went off just fine, since the equipment is highly sensitive and responds perfectly to the operator's commands, working inside of even such a tight space as the loculi was a piece of cake. As a precautionary measure we used a bucket without teeth to proceed as delicately as possible.” The C175 compact tracked mini-shovel, equipped with an exclusive kinematic Superboom for easy loading of lorries, was also present on the worksite for removing the excavation heap.

The team of eight operators from the Prato firm, under the guidance of the Tuscany Archaeological Superintendence will be involved inside the former church for approximately one month for the purpose of bringing up to the light of day the two entire burial vaults that are emerging from beneath the ground.

The relics found will be analysed to determine whether they are truly the remains of the Lady who offered her face to the Mona Lisa and perhaps solve the mystery once and for all.

This isn't the first time that La Prato Excavation has carried out this type of mission. Only last year they were involved in the archaeological excavations at Palazzo Banci-Buonamici in Prato, now the provincial seat, and have also been booked for further engagements of a cultural nature. And of course, the reliability and high-technology of equipment manufactured by Fiat Industrial are always backed up by a comprehensive network of assistance that is always on the job. “Our equipment fleet is constantly being upgraded. We want cutting-edge equipment with easy maintenance that is perfectly compliant with the highest safety standards. That's why we use sensitive equipment that provides a graceful and fluid response to the operator's commands, especially for restoration work in historical buildings or for archaeological excavation where we are often involved. It's no coincidence that our equipment fleet is almost exclusively New Holland Construction…when you're dealing with the unknown, you have to be sure of your equipment!” concludes Toparelli.

The company will approach the U.S. and Canadian segments as one North American market to better meet increasing demand for electrification solutions.
Epiroc
February 26, 2021

The purpose-built mail and package delivery vehicles will be equipped with either fuel-efficient engines or battery-electric powertrains.
Oshkosh Corporation
February 25, 2021

Despite the challenges of 2020, many manufacturers in the heavy equipment industries saw improvement in the fourth quarter and anticipate a better 2021.
Sara Jensen
February 22, 2021

The European construction equipment industry is look to create harmonized rules across the EU for machinery which occasionally travels on roadways.
Sara Jensen
February 16, 2021

The Performance Tiering Strategy makes it easier for customers to select machines with the right mix of features and performance for their application.
John Deere Worldwide Construction & Forestry Div.
February 15, 2021
Follow Us