"Fiscal 2017 was a year of significant transformation for Modine, and we finished on a strong note, achieving significant sales and earnings growth, driven by the addition of CIS to our business portfolio," says Modine President and Chief Executive Officer, Thomas A. Burke. "Our base business also returned to growth in the fourth quarter, driven in part by significant increases in Asia and market improvements. We are very pleased with the integration of the CIS organization into Modine, and we remain on track to deliver annual cost synergies of at least $15 million within the next 3-4 years. These will be driven by ongoing optimization of manufacturing, procurement savings, and maximizing shared support functions."

Net sales for the fourth quarter were $488.3 million, which included $143.0 million of sales from the CIS segment, up 42% from the prior year. On a constant-currency basis, sales of the base business increased $6.7 million, or 2%, from the prior year. The increase in base business sales was primarily a result of strong sales growth in the Asia segment, partially offset by lower sales in the Americas segment as a result of ongoing weakness in the heavy-duty commercial vehicle market.

Gross profit increased $22.7 million in the fourth quarter from the prior year to $84.9 million, including $21.6 million contributed by the CIS segment. Gross margin decreased 70 basis points to 17.4%. The decline was primarily due to higher raw material costs, and the negative impact of incremental depreciation and amortization expense and an inventory step-up adjustment resulting from purchase accounting, which together totaled $3.3 million. These negative drivers were partially offset by savings from procurement initiatives and higher sales volumes.

The company recorded $4.9 million of restructuring expenses during the fourth quarter, primarily related to equipment transfer and plant consolidation costs and employee severance expenses in the Europe and Americas segments.

Fourth quarter operating income was $20.2 million compared with an operating loss of $0.7 million in the fourth quarter of the prior year. Excluding restructuring expenses, acquisition and integration costs, and certain other items, adjusted operating income was $29.2 million, up 23% from the prior year. This improvement was primarily due to the performance of the new CIS segment and procurement savings, partially offset by higher raw materials costs and higher compensation and benefits expenses.

Americas segment sales were $144.6 million compared with $145.1 million 1 year ago, a decrease of 0.4%, including a favorable impact from foreign currency translation. On a constant-currency basis, sales decreased 2.5% year-over-year, primarily due to ongoing weakness in the heavy-duty commercial vehicle market in North America. The segment reported operating income of $13.4 million, up $2.0 million compared to the prior year, primarily due to lower restructuring expenses, and gains totaling $1.1 million from the sale of two vacant facilities. This was partially offset by higher raw material costs, performance inefficiencies, and higher compensation and benefits expenses as compared with the prior year.

Europe segment sales were $134.6 million compared with $139.1 million one year ago, a decrease of 3.2%. On a constant-currency basis, sales were flat compared with the prior year, driven primarily by higher sales to automotive customers, offset by lower sales to commercial vehicle customers. The segment reported operating income of $7.1 million as compared to a $5.0 million operating loss in the prior year, or a $12.1 million improvement. This improvement was driven by lower restructuring and impairment charges in the current year. The quarter included $3.2 million in restructuring charges, while the comparable period in the prior year included a $9.9 million fixed asset impairment, as well as $6.3 million in restructuring charges.

Asia segment sales were $33.3 million compared with $22.9 million one year ago, an increase of 45.5%. This increase was driven by higher sales to automotive and off-highway customers in China, India and Korea. Operating income of $2.8 million improved $1.1 million from the prior year due to higher sales volumes.

CIS segment sales were $143.0 million in the fourth quarter. The segment reported operating income of $7.8 million. In addition, the segment results include $3.2 million of intangible asset amortization expense and fixed asset step-up depreciation expense related to purchase accounting for the acquisition.

Building HVAC segment sales were $38.8 million compared with $40.4 million one year ago, a decrease of 4.1%. On a constant-currency basis, sales were up 2.3% as compared with the prior year. This increase was primarily due to higher sales of air conditioning products in the U.K., partially offset by lower sales of heating and ventilation products in North America. Operating income of $2.8 million was up $1.6 million compared with the prior year, primarily a result of lower restructuring expenses in the current year, as well as lower SG&A expenses.

In fiscal 2017, net sales increased 11.1% to $1,503.0 million. On a constant-currency basis, sales were up 12.1% compared with the prior year. Gross margin was up 40 basis points to 16.9%, as savings related to cost-reduction initiatives were partially offset by the impact of higher raw material costs. In addition, gross margin in fiscal 2017 was negatively impacted by 30 basis points due to the impact of the inventory step-up adjustment related to purchase accounting. The full-year operating income of $39.4 million compares with an operating loss of $7.5 million in the prior year. Excluding pension settlement charges, acquisition and integration costs, restructuring expenses and certain other items, adjusted operating income of $69.3 million was up $6.1 million year-over-year. Earnings per share in fiscal 2017 were $0.29, compared with a loss per share of $0.03 in fiscal 2016, and adjusted earnings per share in fiscal 2017 were $0.78, compared with $0.76 in fiscal 2016.

"Approximately 18 months ago, we launched our Strengthen Diversify and Grow strategic initiative, and I'm very proud of what our teams across the globe have accomplished to set us up for a bright future," comments Burke. "We did what we set out to do.  We have strengthened, diversified and grown our business, positioning us already in the last quarter of fiscal 2017 to effectively offset the impact of soft conditions that remain in many of our key markets. Although some of our markets remain challenged, we are starting to see improvements, particularly in the off-highway markets. We expect that these improvements, coupled with the addition of the CIS business, will lead to significant sales and earnings growth in fiscal 2018." 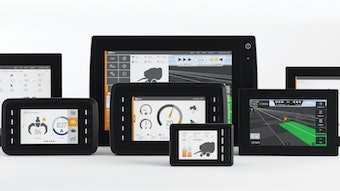