Pulling graders with tractors instead of horses lead to productivity improvements . 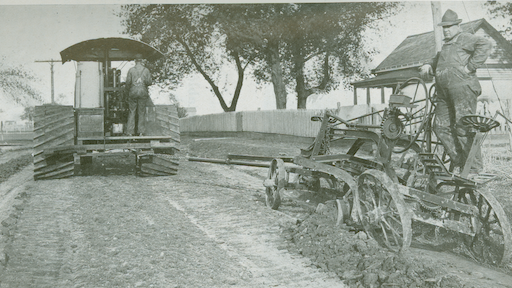 The original means of powering a grader was to hitch the horse(s) or mule(s) up and have at it. Graders so powered are easily identified by the bench up front for the teamster; he would hold the reins while the blademan at the rear operated the grader.

As traction engines and, later, crawler tractors came into use, it was only natural that they should be used to power pull graders. The earliest known example of a grader built specifically for tractor use was the Traction Special, introduced by Russell Grader Company in 1908, and other firms came to offer Traction models. This was a wonderful idea, so long as the grader was strong enough to stand the gaff; pulling a grader with a tractor more powerful than what was recommended could yank the grader out of its work or, at worst, demolish it. The latter outcome could also result if the grader was poorly built or maintained. Manufacturers were careful to specify the maximum number of horses (without necessarily allowing for some breeds being more powerful than others) or maximum drawbar horsepower that could be safely applied to various weights of graders under load. 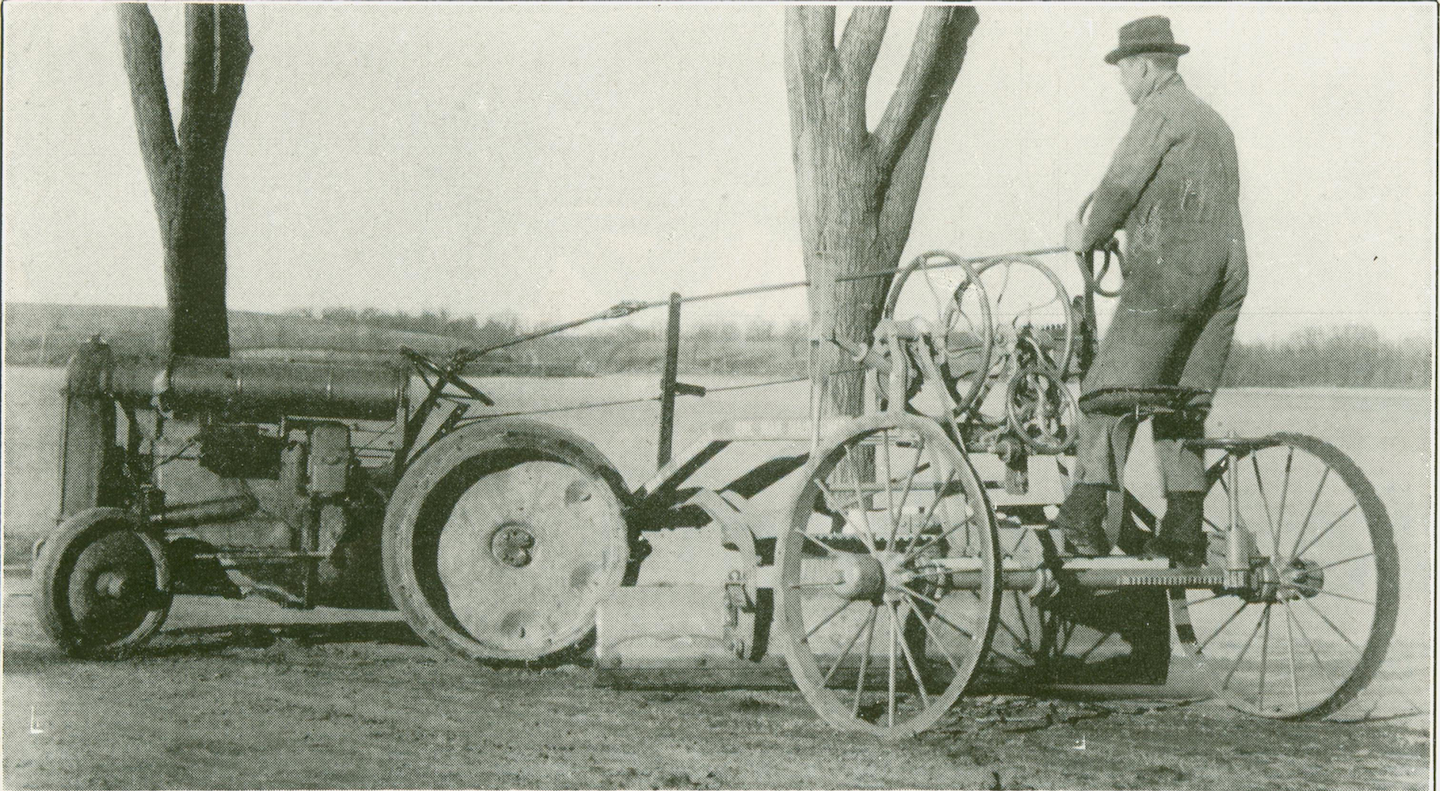 Introduced in 1924, the Edwards Fordson One-Man Maintainer is the earliest dated example of a grader operator being able to control the towing tractor from a grader; but Stockland Manufacturing Company claimed to have invented the idea.C. D. Edwards Manufacturing Company sales literature, c. 1925-1928. HCEA Archives

One advantage of pulling a grader with a tractor was that the grader didn’t have to follow the tractor in a direct line as it would a team. Through use of an offset steering pole, the grader could be steered from the tractor, allowing it to work astride a windrow, on the shoulder or in a roadside ditch. The overall effect was something like modern crab steering, and proper design had the tractor applying its tractive effort to the draft bar, rather than the steering pole.

Along with tractor propulsion, several means were devised to eliminate the cost of a second man on the tractor/grader crew. These entailed either controlling the grader from the tractor, or the tractor from the grader. This was often accomplished by mounting the grader to the tractor like an attachment, so that it could be removed later if desired. Western Wheeled Scraper offered the Westford, which mated the Little Western grader to a Fordson tractor, in 1925; the Westford was capable of 15-20 mi. (24.1-32.2 km) of patrol work per day versus 6 for a horse grader; it took two men 2 hours to do the initial installation, and one man could separate the grader and tractor or remount it in 45 minutes.

The Historical Construction Equipment Association (HCEA) is a 501(c)3 non-profit organization dedicated to preserving the history of the construction, dredging and surface mining equipment industries. With over 3,800 members in 25 countries, activities include publication of a quarterly educational magazine, Equipment Echoes, from which this article is adapted; operation of National Construction Equipment Museum and archives in Bowling Green, OH; and hosting an annual working exhibition of restored construction equipment. The 2020 show will be August 28-30 in Concordia, KS. Individual memberships within the USA and Canada are $35 for one year, $65.95 for two years and $99.95 for three years, and $45.00 US elsewhere. HCEA seeks to develop relationships in the equipment manufacturing industry, and offers a college scholarship for engineering and construction management students. Information is available at www.hcea.net, by calling 419-352-5616 or e-mailing info@hcea.net. Please reference Dept OEM.

Excavation of materials in below-grade situations which were impractical for standard machines brought about development of the Slackline Cableway Excavator.
April 3, 2020