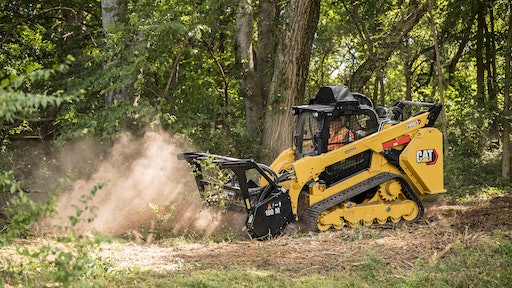 The Association of Equipment Manufacturers (AEM) recently changed its size classifications to address the growing popularity of larger units. “We used to have 2,600-lb. and over ROC,” says Tyler Zima, product specialist for loaders, Bobcat. “Now we have added 3,000-3,500-lb. ROC and 3,500-lb. and over. We are starting to see more machines in the industry that are getting above 3,500-lb. capacity and definitely well north of 10,000 lbs. weight. Some machines are upwards of 12,500-13,000 lbs.”

“It wasn’t long ago that there were very few who envisioned skid steer and compact track loaders with the size and horsepower that are available today,” says Kevin Coleman, senior product specialist, Caterpillar. “I’m not sure if we’ll ever approach, say the 200-hp level, but customers are always looking for larger models with greater capabilities like higher operating capacities, higher horsepower and higher auxiliary flows for increased attachment performance.

This segment continues to grow on a year over year basis. “More contractors are demanding the added productivity that these larger machines bring to jobsites,” says Luke Gribble, solutions marketing manager, John Deere Construction & Forestry. “Even though the machines are larger, they still have excellent maneuverability and transportability when comparing them to other pieces of common construction machinery. The overall affordability of the machines is another factor that continues to draw in customers from many applications when comparing to other common earthmoving machines.”

The recent Tier 4 emissions regulations helped shape the current product offerings. There is a definite cut off point at 74 hp for the required emissions technologies. The solution for the smaller machines is simplified and less costly. “Nobody is offering those mid-size machines like you used to see in the early 2000s that offered 80-85 hp,” notes Zima. “Everything is 74 hp or lower, or 92 hp and above." This is due to cost of the required emissions technologies. “It’s going to cost the same amount of money to go from 74 to 75 hp as it would to go to 100 hp. Environmental regulations are pushing people to go small or go big.”

The performance of the large loaders must offset the increased cost of the emissions technologies. “Manufacturers want to give people enough horsepower, enough lifting capacity, enough pushing power to make it worthwhile,” explains Zima. For example, an extra 10 hp may not be worth the added cost, but 20-25 hp could justify the purchase.

“The larger track loaders with high-flow hydraulics may come at a higher price initially, but they are often worth that higher price if your job applications require the enhanced hydraulic performance,” says MacIntyre. “The operating costs of larger CTLs or skid steers are higher. Machines above 74 hp require DEF fluid. Heavier units burn more fuel and have a tendency to wear down tracks and tires faster.”

Your application is really going to define the correct size. “There’s always going to be a need for the smaller machine in the industry,” says Zima. “When you look at our smaller machines, some of those have gotten a little bigger where you need a might need a CDL, or maybe upgrade your truck and trailer. If you are going to do that, some contractors may choose a larger machine because they don't have a size constraint.”

Pushing the Definition of Compact

Even the largest skid steer-loader and CTLs offer maneuverability advantages over other machines, such as compact wheel loaders since they have the ability to turn within the size of the machine. “You’re just more nimble with a CTL, even when you are getting into that size of machine,” says Zima.

“A skid steer or track loader has a bit more maneuverability than a compact wheel loader,” says MacIntyre. “For example, a skid steer can easily counter-rotate in place to reposition when needed, but most operators try to avoid counter-rotating a skid steer since it wears down the tires more quickly.”

Larger buckets equate to faster production. For loading dirt, excavating or loading trucks, you can work with a 1-yd. bucket as compared to, say, a .5-yd. bucket with the larger skid steers and CTLs. As a result, if you are excavating and loading material into a truck, your productivity and the amount of work completed per hour is just that much quicker.

Most of the large-frame skid-steer loaders and compact track loaders utilize a vertical lift configuration. “At John Deere all our large-frame skid steers and compact track loaders come standard with vertical lift configuration,” says Gribble. “One of the biggest advantages to the vertical lift configuration is the ability to provide better overall stability when lifting a load off the ground, especially at maximum reach. Also, the fact that the height to hinge pin will be greater on a vertical lift machine than a comparable model with radial lift gives this an additional advantage. When comparing the lift capabilities of a skid steer or CTL versus a compact wheel loader, there can be circumstances, depending upon which model you are comparing to, where the skid steer/CTL does indeed have a greater or similar height to hinge pin.”

There are many advantages to the vertical lift configuration. “You get an increase in the ROC because the lift path is tighter to the machine all the way through the lift cycle until you get to max height,” says Zima. You also get the clearance for loading into standard trucks. “If you look at our S850 and our T870, those are our largest skid steer and largest track loader that we offer today. We have a hinge pin height of 12 ft., which is very comparable to a compact wheel loader.”

“Large vertical lift skid steers and track loaders often achieve similar lift heights as compact wheel loaders,” says MacIntyre. But there are other drawbacks. “Compact wheel loaders have better visibility in certain areas since the loader arms are positioned in front and not on each side of the cab. This difference in design, along with center articulation, can provide visibility advantages for tasks that require pallet forks.”

MacIntyre agrees, “Large skid steers and track loaders are engineered to have optimal hydraulic horsepower. The manufacturers gear the auxiliary hydraulic systems to have enough power to operate high-capacity attachments. On our 90-hp models, CASE offers enhanced high-flow auxiliary hydraulics with pressures up to 4,000 psi for running high-capacity attachments like cold planers and mulchers.”

Many customers look to the larger, high horsepower machines to deliver high performance and productivity when paired with high-performance hydromechanical attachments. “The larger, more powerful compact track loaders deliver a machine and attachment combination designed to bring unparalleled speed and quality when they are paired with tools such as mulching heads or cold planers/milling heads,” says Coleman.

He adds, “The larger models have grown in popularity due to customers finding new ways and applications to use the larger machines with the higher load handling and hydraulic horsepower capabilities. As an example, the largest Cat compact track loader, the 299D3 XE, delivers outstanding performance when powering high production hydromechanical attachments like mulching heads. This machine supplies a 110 gross horsepower engine that combines with a 40-gpm high-flow/high pressure hydraulic system, delivering a hydraulic horsepower rating of 94 hp.”

Competing with Other Machine Forms

“Height is another advantage as well in that compact wheel loaders may not be able to fit into barn doorways or buildings if they are too tall,” notes Gribble. “Skid steers and CTLs typically do not run into this issue.”

Versatility is often an advantage of utilizing larger skid-steers of CTLs. “A compact wheel loader has some advantages, such as faster travel speed and visibility from a higher seating position," says Coleman. "However, a compact wheel loader is somewhat limited in versatility versus a skid steer or compact track loader due to the exceptional maneuverability of these models in tight quarters applications. Compact wheel loaders also focus a bit less on high-powered hydromechanical attachments, making the high flow/high pressure auxiliary system available on Cat skid steer and compact track loader models desirable for attachments like milling heads, mulchers, etc.”

In some applications, the large CTLs can even replace a small dozer. “Customers looking to get into the business can complete many tasks like general site preparation and grading, which used to require a small dozer,” notes Gribble. Skid steer and CTL maneuverability lends them an advantage over small crawler dozers. “Also, rubber tires and tracks mean that you can operate on finished surfaces while minimizing the risk of damage to the surface that you could not otherwise accomplish with a crawler dozer. With the added versatility that attachments bring to the equation as well, customers are not limited to the type of work they can do throughout the entire year either.”

The larger models provide higher rated operating capacities for lifting and handling the heaviest loads. “So, they perform very well in grading and in material handling applications,” notes Coleman.

The growth in larger loaders has primarily been concentrated on compact track loaders. “In general, the market has been trending more and more towards CTLs over skid steers regardless of size class for the last few years,” says Gribble. “If you know you are going to be lifting heavy objects or doing a lot of clearing or demo work, a CTL is a great option to consider as they typically have a higher lifting capacity and more pushing power than skid steers.”

“There is and will continue to be a market for skid steers,” says Coleman. “However, the popularity of the compact track loader market in North America does continue to increase. Customers are continuing to find ways to utilize the improved traction, increased flotation, lower ground disturbance and greater machine stability that a track machine offers versus a rubber tire skid steer. A rubber track also allows customers to extend their working season with the additional flotation and lower ground disturbance.”

As the market continues to shift toward CTLs, contractors should consider future demands. “Contractors may not need the added performance of a larger CTL today, but they should consider their future needs when making the initial purchasing decision,” says MacIntyre.