The development and certification of autonomous driving applications for trucks is a challenge for which new approaches and methods must be introduced. 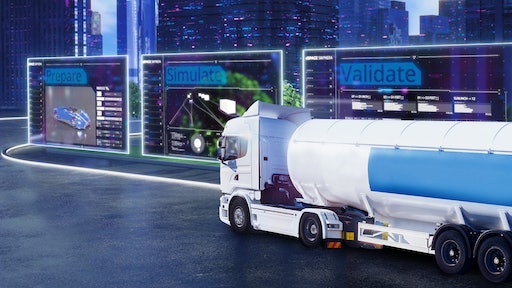 Self-driving trucks offer great opportunities to the logistics industry and are a crucial future technology alongside e-mobility or hydrogen-based propulsion. The advantages of autonomously-driven trucks are promising, especially in times of a shortage of truck drivers. Given that in the U.S. current estimates indicate a shortage of 80,000 drivers, the vision of a driverless truck capable of operating around the clock without rest periods, while significantly reducing the risk of accidents, seems to be a welcome opportunity to increase productivity.

For self-driving trucks, there are particularly favorable aspects of applications that may not exist to the same extent for passenger cars. Many truck transports take place in areas that are less complex than those for urban transport. These include freeways, highways and even geofenced spaces such as port facilities or within company grounds. Nevertheless, the development and certification of autonomous driving applications for trucks is a challenge for which new approaches and methods must be introduced.

Building up public trust of any autonomous vehicle is possible only if manufacturers can demonstrate that their systems have been thoroughly tested in every conceivable traffic situation. Looking at the following example, it quickly becomes clear that this cannot be achieved in regular test drives with physical prototypes: As early as 2016, RAND Corp. published a study showing that a vehicle would have to autonomously drive 8 billion miles (approximately 12.9 billion kilometers) without a fatal accident to statistically prove that autonomous driving is safer than a human driver, because human drivers cause 1.09 fatal accidents per 100 million miles driven. Let’s assume that a manufacturer has a fleet of 100 autonomous vehicles If these vehicles were to drive at a speed of 40 mph (approximately 64 km/h), 24 hours a day, 365 days a year, then it would take 228 years for this fleet to achieve 8 billion miles. I think we can all agree that this would not be practical. After all, one would have to start testing all over again if only one line of code or one parameter were to be changed in the vehicle software.

There are two factors that make it possible to validate autonomous vehicles. First, a paradigm shift away from the number of driven miles, in favor of scenario-based testing. Second, moving the majority of tests to a virtual test environment. Such a software-based test environment makes it possible to scale tests and therefore perform a greater number of tests in a shorter period.

In scenario-based testing, certain driving situations are selected in which the driving functions are brought to their limits by special traffic constellations or traffic participants with erratic behavior. These situations can be simulated in a virtual test environment, where they can be used and reused to test the vehicle function without posing a safety hazard to anyone involved. If these scenarios can also be abstracted and made parameterizable, changing the parameter values of a single scenario can generate a plethora of similar scenarios that push the driving function to its limits. This, in turn, means a large number of tests that have to be completed to make sure that the function behaves correctly in every situation that could possibly occur in road traffic.

The virtual test environment in which these scenarios are executed and the driving function is tested also has to meet certain criteria so that it can be used for safety-relevant tests of driving functions. First, the models used for the vehicle behavior, such as vehicle dynamics, motor, brakes, etc., have to simulate realistic behavior. One way to ensure this is to complete specific driving maneuvers in a real test drive and then in the virtual simulation environment before comparing the two. This is also the way to validate models that replicate the reaction of other traffic participants to the vehicle under test. Furthermore, the virtual sensors have to be able to perceive the environment and vehicle under test as they would in reality. This is particularly important in later development phases, where environment detection is also tested in the virtual world.

Second, the results must be reproducible. This can only be achieved by using deterministic models. The models must be deterministic with short computation times. This is the only way to complete the scenarios as computation time is finite. It is absolutely vital that all models can be simulated together in real time or even faster, especially when it comes to systems that are tested on hardware-in-the-loop test benches, where the final electronic control unit (ECU) is available as real hardware while the surrounding vehicle, including the vehicle environment, is virtual and the ECU is fed the required signals. If signals do not reach the ECU in the correct time frame, the ECU enters an error state and the test is no longer meaningful.

High-performance models are also required for software-in-the-loop environments, where both the simulation environment and the function under test are available as software. By scaling this simulation environment up, for example, by using cloud technology, many tests can be executed in parallel, but improved model performance means that more tests can be completed in the same time or the same number of tests can be completed faster. This saves valuable test and development time, which translates into lower costs.

A number of regulations and standards ensure that driving functions installed in road-legal vehicles are safe. ISO 26262 is an ISO standard for safety-related electrical/electronic systems in motor vehicles. It is used wherever electronic functions and software are used in the vehicle that affect functional safety. It is of great help to car manufacturers and suppliers if they can use tools or components that are already ISO 26262 certified. As you identify potential tool suppliers, making sure the product is ISO 26262 certified would allow you to focus on the rest of the process chain with the certainty that the functions developed meet the highest industry standards in terms of functional safety.