MINExpo is one of the next big industry events to take place in person, and manufacturers are preparing to show their latest mining equipment and technology. 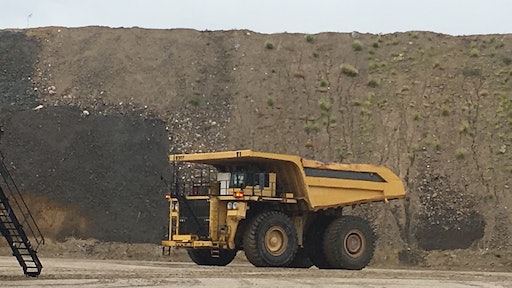 A Komatsu autonomous haul truck in operation at its test facility in Arizona.
S. Jensen

As many trade shows gear up for a return to in-person formats, one the OEM Off-Highway team is looking forward to this year is MINExpo International®. Held once every 4 years, this event is a giant—not only in regards to the amount of exhibit space but also the equipment on display.

READ MORE: In-Person Tradeshows are Back

Now to be fair, much of the equipment we cover is large in size, but coming face to face with a 2-story mining dump truck definitely gives some perspective on things...as does a convention center filled with similarly large equipment and components. There are many trade shows our team looks forward to attending, but there's just something about being around all that large equipment that makes attending MINExpo extra fun and different, partially because we don't get to be around that type of equipment as frequently as some other types.

Also, the many technological advancements that have been made over the years in the mining industry always make for an interesting show. Electrification and automation have been an integral part of the industry for over a decade now. Because of the environments in which mining equipment operates, electric powered machines are seen not only as more efficient but also a necessity for safety—particularly in underground mining applications due to the confined spaces in which equipment operates and the increased safety risk caused by emissions in those spaces.

Mining is also an ideal industry for autonomous vehicle operation because the mines are usually remote and private, limiting the amount of other vehicles that would be in the work area and thus in the autonomous equipment's path. Komatsu and Caterpillar are just some of the OEMs which have autonomous equipment in operation in mines around the world.

In 2020, Komatsu Mining announced mining customers utilizing its FrontRunner Autonomous Haulage System have now hauled more than 3 billion metric tons of materials. Caterpillar made a similar announcement earlier this year that customers using its Cat MineStar Command for hauling technology have surpassed 3 billion tonnes of hauled material. Both companies tout the productivity as well as safety improvements these autonomous systems have provided.

Automation allows workers to often operate equipment from a safer, remote location where they will also be more comfortable. And because the element of human error is removed from machine operation, work can be executed more precisely and thus productively.

While MINExpo had to be pushed in 2020 due to the pandemic, organizers are ready to hold the event in September 2021. And they're anticipating it will be as big as ever. According to show organizers, over 675,000 sq. ft. (62,709.6 sq. m) and 11 halls of the Las Vegas Convention Center will be filled with mining equipment and technology.

Several manufacturers—over 1,200 suppliers say show organizers—are currently scheduled to exhibit at the show, demonstrating the industry's readiness to get back to in-person trade shows.

Caterpillar Inc. has announced its plans for the show which include the debut of a new 100% battery electric loader for underground mining operations. The new Cat R1700 XE LHD features a 15-tonne (16.5-ton) payload, 24,190-kg (53,330-lb.) lift and tilt breakout force.

Charging of the machine's batteries will be made more convenient with Caterpillar's new portable charger, the Cat MEC500 Mobile Equipment Charger. This will eliminate the need for battery swapping, as has been the case in some other types of electric mining equipment. The charger can be moved by towing it, using a fork truck or even the R1700 XE and fully recharges the batteries in 20 minutes, according to Caterpillar.

The company also plans to unveil what it claims is the world's largest electric dozer with high drive, the Cat D11 XE. In addition, it will introduce the Cat D10 dozer which is designed to provide up to 4% less fuel consumption than the previous model.

Read about more of Caterpillar's planned introductions at MINExpo 2021.

Liebherr has announced it will unveil three new excavators at the show, and Komatsu has made several announcements about new equipment and technology it will showcase. Among these is an open technology platform to aid data collection and processing for mining customers. Read about these and other product launches at the show.

More show related announcements are starting to pour in as we inch closer to the show, so be sure to watch out for those. You can find all show and mining related news on our dedicated MINExpo channel on our website. Leading up to, the week of and the week after MINExpo we'll have dedicated newsletter deployments as well to deliver news directly to your inbox. Be sure you're subscribed so you don't miss out on any show news.

Will you be attending MINExpo this year? If so, what equipment or technologies are you most looking forward to seeing? Are you excited to get back into the industry for in-person events? Let us know!