The Next Compact Equipment Evolution?

A company with a unique concept vehicle is poised to turn the compact equipment market on its head with its extendable-base skid steer design. 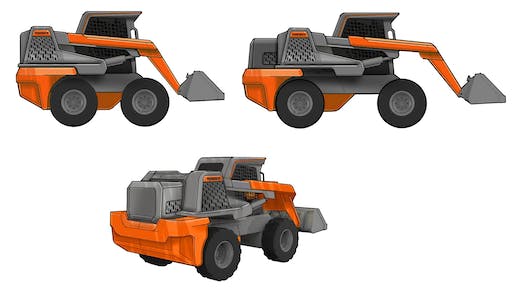 In the current construction equipment market, a versatile machine is an invaluable asset to reduce the total pieces of equipment on a jobsite and get the most use and productive hours per day. Skid steers are a particularly popular vehicle type, especially with their wide array of attachment options making them a true multi-purpose tool.

Skid steers are commonly assessed by their vertical lift and reach metrics as well as their ability to work on rough and sloping terrain. The higher the lift and farther the reach, the easier, faster and safer it is to load dump trucks and other jobsite receptacles. Every skid steer on the market is limited by its weight and wheel base as to how much it can lift to a certain height and distance from the vehicle.

This limitation was a particular point of frustration for one sod farmer based in Australia who was unable to lift a normal pallet of sod if it was weighed down by water from a recent rainfall. Out of pure necessity, he and friend Marc Dack developed a makeshift extendable skid steer solution with a heavily greased single telescopic tube along the bottom of the machine—and the lengthened base solution worked.

Eventually Dack moved to Wisconsin and brought the idea with him. He subsequently added a second telescopic tube and an extendable boom to the design, patented the ideas, and set to work creating what would become the Pro-Handler at Extend Manufacturing LLC, an affiliate of Innovative Equipment LLC. This “utility handler” is like a skid steer and telehandler in one, and solves a lot of the challenges faced by skid steers and compact loaders including tip-over and reach limits without adding additional weight.

“The machine has two chassis components. The back portion of the chassis carries the engine, hydraulic system, back wheels and tanks, and acts as a counterweight,” explains Dack, now VP of Extend Manufacturing and responsible for product development and design. “The front portion carries the front wheels, cab and boom towers along with the booms.” The two segments of the chassis are fitted together with the two telescopic tubes housed on either side of the cab (on the front) and the engine block (on the rear). The extension components run the full length of the machine and are joined by two hydraulic cylinders that extend and contract the wheel base.

“We structured the extension system to be electronically controlled with manual overrides to allow the driver to adapt to certain circumstances, such as a space-constrained environment where it’s not feasible to extend,” says Chris Osswald, President of Extend Manufacturing. The extension system receives feedback from sensors measuring loads and pressures to ensure if a driver plans to lift a load that is too heavy for the current base, it will automatically extend the chassis to accommodate the load. “It’s simply a safety issue to make sure the vehicle won’t tip over,” says Dack. “The system can also be extended while the machine is in motion.”

The Pro-Handler is driven by four hydraulic wheel motors, one for each wheel, to achieve four-wheel drive without a chain drive system and still facilitate the extendable wheel base.

When fully extended, the Pro-Handler features a wheel base of 84 in. (2.13 m), significantly more than the larger skid steers available on the market that only reach a maximum wheel base of between 48.9 and 54.6 inches1 (1.2 and 1.4 m). The larger wheel base of the Pro-Handler does not come at the expense of additional weight, staying at just over 8,000 lbs. (3,636 kg) for more manageable transport.

A longer wheel base also allows for easier transport of heavy loads on steeper grades, including terrain that slopes away from the loading site. And with all of the additional versatility the Pro-Handler vehicle can provide, “it will be more affordable than the large skid steers it outperforms,” claims Dack.

At this time, Extend Manufacturing is looking for an OEM partner to bring its patented Pro-Handler extendable skid-steer proof of concept machine to market, as well as funding to finish development and make two pre-production machines. “We’d prefer to build and manufacture the vehicle in the U.S., that’s the goal, but we’d consider international options,” confirms Dack.