Within recent years the equipment manufacturer has developed several new machine types, including those with alternative power sources. 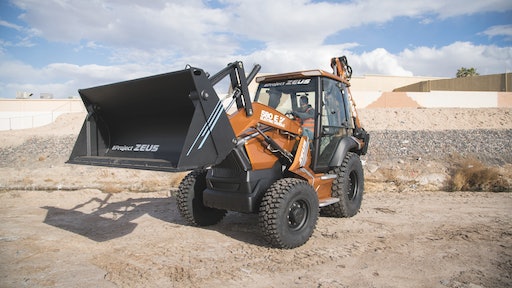 Like many heavy equipment manufacturers, Case Construction Equipment (Case CE) continues to evolve its products to meet the ever-changing needs of customers in the construction industry. This has included the development of several concept machines, some of which are now being brought to market.

At CONEXPO-CON/AGG 2020, the company announced its Project Minotaur dozer/loader concept—first unveiled at CONEXPO 2017—is now available in the market and called the DL550B. The machine leverages the footprint of a compact track loader (CTL) with the chassis-integrated C-frame and blade of a dozer to create a two-in-one machine for grading and loading applications.

During this year's show the company also introduced its latest alternatively powered machine, known as Project Zeus, a fully-electric backhoe loader. It is powered by a 480V, 90 kWh lithium-ion battery pack which can be charged by any 220V/three-phase connection. The machine is designed to support most common 8-hour workday applications.

Read the full article on our sister site ForConstructionPros.com to learn more about the new electric backhoe loader design and Case's other equipment advancements.