More options have been laid out for fleet managers looking for cleaner and more efficient truck options, including electric and hydrogen-powered models. 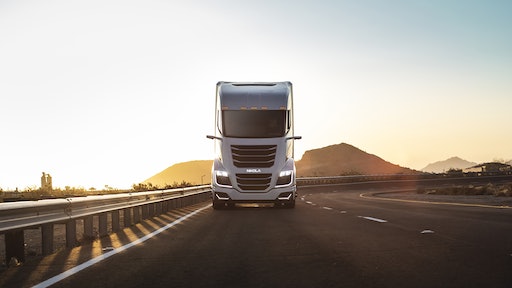 Back in April, Nikola launched its Nikola TWO and TRE at its Nikola World event in Scottsdale, AZ. This adds two more electric on-highway class 8 trucks to its existing Nikola ONE truck launched in 2016.

>> Learn more about the Nikola One and its onboard technologies in Sara Jensen’s article, Electrification Enables a Re-Evaluation of the Class 8 Truck Design.

Anheuser-Busch placed an order “up to” 800 trucks in May of last year for Nikola Motor Company’s hydrogen-electric powered Nikola One semi-truck. On initial estimations, the order would provide an 18% reduction in carbon emissions from the brewer’s logistics needs. The brewer’s order with Nikola also went hand-in-hand with a commitment to covert its entire long-haul dedicated fleet to renewable powered trucks by 2025.

The order is part of a partnership that also establishes the necessary hydrogen fueling infrastructure network. Nikola will be working with Anheuser-Busch to develop the first 28 of the anticipated 700+ hydrogen stations by 2028.

>> Read more on the Anheuser-Busch and Nikola Motor Company agreement and sustainability goals at https://oemoh.com/AB-NMC.

With order commitment and a plan for infrastructure development, the hydrogen-fuel vehicle manufacturer was ready to launch the next generation of its 2016 prototype. The unveiling of Nikola TWO and Nikola TRE solidified the manufacture as a serious player in the clean emissions vehicle space.

But, it’s what’s inside the Nikola vehicles that make the trucks what they are. Major suppliers like Bosch, MEKRA Lang and Meritor were highlighted at the truck launch event. Bosch and MEKRA Lang developed the mirror replacement system for the Nikola TWO, a practice that is becoming common place in the trucking industry to reduce drag and improve a driver’s field of view.

“Our Digital Vision System enables our customers to design a more aerodynamic tractor while enhancing the driver’s field of view,” says Juergen Stachl, Director of Sales and Engineering at MEKRA Lang North America. The system replaces mirrors with digital cameras that allows for standard views, but also has a panning feature to shift the field of view during turning events.

In a press release on the contribution to the Nikola TWO vehicle program, MEKRA stated that it had been able to leverage a more complex electrical communication with the vehicle CANbus enabling a more reliable panning feature. “The reliability and safety of this system has been of paramount significance during its development and is therefore in compliance with national Functional Safety Standards such as ISO 26262,” the press release noted.

The collaboration between Bosch and Nikola involved the engineering teams from Bosch locations in the United States and Germany, and amassed more than 220,000 hours into the development of the Nikola trucks.

“This has been a 2-1/2 year cooperation targeted at implementing advanced technology into a totally new and unique approach to trucking with the highest levels of engineering excellence,” says Jason Roycht, Vice President and Regional Business Unit Leader, Commercial Vehicles & Off-Road for Bosch in North America.

>>Learn more about Bosch’s technology contributions and collaboration with Nikola to develop the Nikola Two.

A European prototype, the hydrogen-electric Nikola TRE, was also launched at the event. The TRE will be the “first European zero-emissions commercial truck to be delivered with redundant braking, redundant steering, redundant 800V DC batteries and a redundant 120 kW hydrogen fuel cell, all necessary for true level 5 autonomy. Expect our production to begin around the same time as our USA version in 2022-2023,” stated Nikola Motor Company Founder and CEO Trevor Milton.

European testing is projected to begin in Norway around 2020. Nikola is also in the preliminary planning stages to identify the proper location for its European manufacturing facility.

Read more about Nikola’s truck releases, onboard technologies and its future goals.

The new LT Series will be up to 8.2% more fuel efficient than the previous model, aided by aerodynamic and other improvements.
International Trucks
October 25, 2019
Follow Us