Mack's new Class 6 and 7 MD Series trucks are designed specifically for medium-duty applications and will be built in a new production facility near Salem, VA. 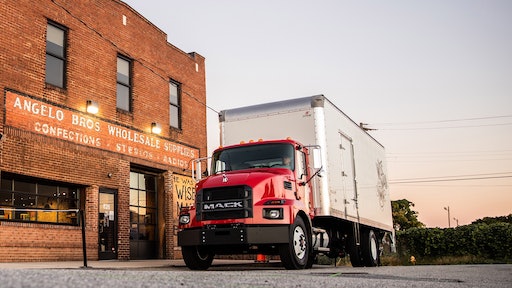 The new MD Series is suited to various applications, including pickup and delivery.
Mack Trucks Inc.

Mack Trucks announced on January 30 it will start producing a new medium-duty truck series, the Mack MD. In addition, the company is making a $13 million investment to establish its Roanoke Valley Operations (RVO), a new manufacturing facility in Roanoke Valley, VA, for the production of the Mack MD Series. The project will result in the creation of up to 250 new jobs once the facility is fully up and running.

Company executives and public officials from the region made the announcement at the new facility near Salem, VA. A prototype of the new MD Series was unveiled, as well.

Virginia Governor Ralph Northam said during the event that the area's workforce is the reason companies like Mack Trucks are coming to region. "We have one of the most talented workforces," he said. "We need to continue to be able to train our workforce for these 21st century jobs."

“Mack Trucks is very proud to make this investment and to now offer a full lineup of Class 6 to Class 8 commercial vehicles, serving virtually every segment of the market,” said Martin Weissburg, Mack Trucks President. “With this investment, Mack is well-positioned for future success, and we’re taking orders for the new truck beginning today.”

Mack’s investment is being used for equipment, tooling and building enhancements in the 280,000 sq. ft. (26,012.9 sq. m) facility dedicated to the assembly of Mack medium-duty vehicles.

Weissburg noted during the launch event the company was able to quickly get the prototype and testing of the truck completed, as well as the new production facility up and running.

Benefits to the region

Having Mack Trucks make this investment in the area brings not just jobs, but well paying jobs so people in the area "can support themselves and their families, and enjoy a great quality of life," said Governor Northam.

David Radford, Chairman of the Roanoke County Board of Supervisors, said once the new facility reaches its goal of 250 jobs it will have an annual financial impact of $364 million in the region. "This further strengthens our economic position and create new opportunities for our citizens," he said.

The new facility will begin serial production of the Mack MD Series will starting in July 2020.

Mack Trucks chose the location in Virginia for its proximity to its headquarters in Greensboro, NC, and other production facilities in the mid-Atlantic, including sister company Volvo Trucks. The logistics flow along I-81—a major freeway near the new facility which runs through the region—was a key factor for the company as well.

Also beneficial was the site readiness of the facility. Few renovations and modifications were necessary to prepare for production of the new MD Series, said James Chenier, Senior Vice President, Strategy and Business Development at Mack Trucks.

These new truck models are specifically built for medium-duty applications. They are designed for applications requiring dry van/refrigerated, stake/flatbed, dump and tank truck vocations. The MD6 model does not require a Commercial Driver’s License (CDL) to operate for non-hazardous payloads.

Available in 4x2 configurations, the MD6 and MD7 models feature a sharp wheel cut for enhanced maneuverability for tough urban settings. The MD Series cab design features a short bumper-to-back-of-cab (BBC) measurement of 103 in. (261.6 cm). Mack matched the bold look and styling of the Mack Anthem, Mack’s highway model, as a basis for the grille and hood design found on the MD Series.

Components used in the MD Series are a combination of Mack products and those from other industry suppliers. Roy Horton, Director, Product Strategy at Mack Trucks, said that for the medium-duty components not in its current portfolio, the company partnered with suppliers whose products are already known and used in the industry.

An all-new cab is also included on the MD Series. It’s a clear backup cab configuration which is easily adaptable to all of the body options available for various applications. A rear-window comes standard on the cab.

According to Horton, a unique selling point of the MD Series is the short BBC. “What that does is improve maneuverability [and] turn radius,” he explained. “It helps [customers] load up the front axle a little more, which distinguishes us in the marketplace.”

Additional features of the cab include the grab handles and steps being placed within safe, easy reach. A shorter hood on the MD Series enhances both visibility and maneuverability.

Inside the cab, Mack has leveraged many of the components used in its heavy-duty trucks. These include the wraparound dash, ergonomically designed controls, tilt telescopic steering column, and a flat bottom steering wheel which provides some extra room for drivers. Cruise control, power windows and a rubber airside seat are also included. “These are the features that drivers love on our heavy-duty side, and they're going to work very well for us on the medium-duty side, as well,” said Horton.

Why the medium-duty market now?

With the new Mack MD, Weissburg said the company now has a full line of trucks which will attract even more customers to its brand.

“We’re now absolutely able to provide a single-source solution for all of our customers with the addition of the medium-duty [truck],” added Jonathan Randall, Senior Vice President, North American Sales and Marketing at Mack Trucks.

Randall said it took about 2 years to go from the first idea for the MD Series to what is now available, including production of the trucks. “We involved a lot of different people…our dealers were part of a team that came in and looked at variants of what we were doing and gave us feedback,” he said.

He said that if you look at the medium-duty market, there’s a lot of customers who already run Mack trucks and typically have a need for Class 6-8 vehicles. “They’ve been looking for someone who’s able to provide them a single source [for their vehicles]…and we now have the answer for that,” said Randall.

In addition, he said the medium-duty market is a good one. Mack looks at volatility and other important aspects when determining which markets to enter. The medium-duty segment is traditionally steady at 90,000-100,000 trucks sold year-over-year in the U.S. and Canada, with about three quarters of that being Class 6 models, said Randall.

Offering a Class 6 model opens the company up to new types of fleets, as well, which do not have a need for CDL certified drivers, such as those doing pickup and delivery or hauling material such as lumber. Often times they are private fleets whose core business is something other than trucking; transportation is just a part of their business.

Stability of the market is why Mack chose now as the time to re-enter the market. In addition, continued advancements and investments by dealers as well as the approach taken by the company were major factors.

While previous iterations of Mack medium-duty trucks were based on models more suited to other markets, Randall said the MD Series is a North American truck. It is designed specifically to meet the needs of customers in North America. “We took our existing components and used what we could, and then partnered with known names in the industry to come to market with [this truck].

“Application excellence is still our guiding principle and [the MD Series] fits that mold. So, the investments our dealers have made, the customers’ demand for it, and stability of the market made a lot of sense for us,” concluded Randall.

*Editor's note: This article was originally published on Jan. 30, 2020, and updated Feb. 26 with additional information.