With the new bus, the company becomes the first to offer two fuel cell-electric models eligible for federal funding. 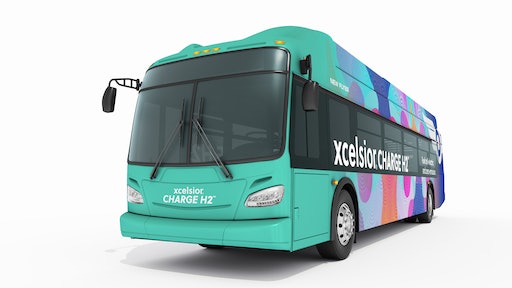 The Xcelsior CHARGE H2 are vehicles that use environmentally-friendly hydrogen and fuel-cell technology to create electricity and charge batteries for extended-range zero-emission transit operations, saving 85-175 tons of greenhouse gas per year from tailpipe emissions compared to a traditional diesel bus. With a range of up to 300 miles, the bus can be refueled in 6-20 minutes depending on the model and operating conditions, and requires no overnight plug-in electrical re-charging. The Xcelsior CHARGE H2 also features regenerative braking while decelerating, which recharges the batteries and reduces energy consumption for extending range. The only tailpipe output is clean water vapor.

New Flyer has over 50 years of experience manufacturing zero-emission buses (ZEBs). It introduced its next-generation battery-electric bus, the Xcelsior CHARGE in 2017. With the addition of the Xcelsior CHARGE H2, New Flyer offers the most diverse lineup of commercially available zero-emission transit buses in North America, and remains the only North American manufacturer to provide all three types of ZEB propulsion systems: trolley-electric, all battery-electric, and fuel cell electric.

“With the addition of the Xcelsior CHARGE H2, New Flyer proudly offers a robust line-up of zero-emission transit buses to assist in the transition to clean transit, to serve the evolving needs of communities, and to meet increasingly stringent greenhouse gas emissions regulation such as California’s Innovative Clean Transit Rule,” says Chris Stoddart, President, New Flyer. “We anticipate fuel cells for extended range will complement all battery-electric technology, not only in transit, but other industries such as commercial trucks.”

According to the California Air Resources Board (CARB), adopting zero-emission public transit can reduce greenhouse gas emissions by 19 million metric tons from 2020 to 2050 – the equivalent of taking 4 million cars off the road – and will reduce emissions by approximately 7,000 tons. Programs like CARB’s Innovative Clean Transit (ICT) regulation challenges transit agencies to look for cleaner energy sources by mandating that California public transit agencies operate 100% ZEBs by 2040.

In 2018, New Flyer became the first bus manufacturer in the world to sign on to the Shared Mobility Principles for Livable Cities, joined CharIN to support industry charging standards for all electric vehicles, became the first licensee outside the Volvo Group to join OppCharge in North America, signed CALSTART’s Global Commercial Drive to Zero to support fast-tracking adoption of clean trucks and buses, and also signed the Transportation Electrification Accord focused on driving an equitable and prosperous future for electrified transportation.

Briggs & Strattons' Brian Hazelton and David Frank discuss Vanguard’s growth in the electrification space and what’s to come from this power solutions provider in the next year.
Briggs & Stratton Commercial Power
Sep 14th, 2022

Download this whitepaper to learn which OEM and supply chain industries are seeing an increase in challenges due to the war in Ukraine and the alternative resources are being researched for long-term solutions to be used in the future.
Sep 8th, 2022
Latest

The new Class 5-8 medium-duty trucks were designed from the ground up with larger operator cabs and a new transmission to improve customer operations.
Curt Bennink
Apr 6th, 2021

The new HX Series is available in both a set-forward axle HX520 and a set-back axle HX620.
International Trucks
Dec 2nd, 2020

The 49X was designed from the ground up to meet the most demanding vocational applications.
Curt Bennink
Sep 30th, 2020

The range includes a fully electric and plug-in hybrid truck which can be customized for various urban transport needs.
Scania AB
Sep 15th, 2020

The Urbino mild hybrid uses a hybrid system which captures and stores power as the bus brakes for use when necessary.
Sep 11th, 2020

The first Volta Zero pilot fleet vehicles will start trials with Europe’s largest logistics operators in the first half of 2021, with the start of production scheduled for 2022.
Volta Trucks
Sep 7th, 2020

The first two pre-series versions of the new 15 m electric bus will be fitted with six battery packs with a total capacity of over 470 kWh.
Apr 27th, 2020

The four new truck models are available with various cab options which can be customized to various applications and driver needs.
Volvo Group Global
Mar 2nd, 2020

Mack's new Class 6 and 7 MD Series trucks are designed specifically for medium-duty applications and will be built in a new production facility near Salem, VA.
Sara Jensen
Feb 26th, 2020

The Volvo VNR 660 features a shorter, 164 in. bumper to back-of-cab length for weight savings from decreasing the overall size of the truck.
Volvo Trucks North America
Dec 19th, 2019

The three companies have formed a joint venture to accelerate emissions-free transportation and will collaborate on bringing the Nikola TRE to market by 2021.
OEM Off-Highway Editorial Staff
Dec 3rd, 2019

The new LT Series will be up to 8.2% more fuel efficient than the previous model, aided by aerodynamic and other improvements.
International Trucks
Oct 25th, 2019