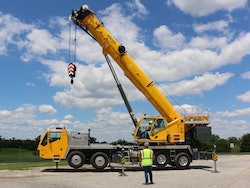 Manitowoc’s 115 USt capacity Grove TMS9000-2 has been used by many in the truck-mounted crane market ever since its launch in 2017. The machine now includes an extra 25 bhp and a series of design improvements that have enhanced operator comfort, reduced machine weight and improved the setup process.

“We updated the Cummins engine from the ISX to the new X12 engine. With the new engine we increased the horsepower to 475 bhp, while ensuring compliance with the latest on-highway emissions standards,” explained JJ Grace, product manager for truck-mounted cranes at Manitowoc.

Grove used the engine repower to introduce a host of additional improvements, all made in direct response to customer feedback.

The outriggers have undergone a series of modifications to make jobsite setup even simpler and faster. The rear outrigger box, for example, has been raised by just under 5 in. to improve the departure angle to 18 degrees, while the front outrigger jacks have been raised 3.5 in. to improve ground clearance. This also makes sliding outrigger mats underneath even easier.

Additionally, there is now an extra three inches of outrigger stroke, while the outrigger pad size has been increased from 20-24 in.

“Our outrigger improvements can play a big part in making the crane more user-friendly, and elevating the overall operating experience,” Grace said. “That was a change made in response to customer suggestions and will serve to enhance their trust and confidence in our machines even further.”

Both stronger and lighter

While the Grove TMS9000-2 already boasted the lowest GVW in its class, the latest models are now even lighter at just 80,311 lbs. for the basic configuration. Thanks to the new carrier and engine, almost 1,000 lbs. of excess weight has been trimmed.

“After we launched the original TMS9000-2 at CONEXPO in 2017, its high level of flexibility quickly won over a large and appreciative customer base,” Grace added. “Their use varies greatly from region to region, whether that’s in oil fields or HVAC installations, so we provided a wide range of packages to suit those different needs and markets. Now, with these new modifications — many of which only came about because of Manitowoc’s belief in, and enthusiasm for, the Voice of the Customer product development process — we have enhanced their appeal to a wider array of individual operators, too.”

This controller is an embeddable board that allows customers to build FORT wireless communication and safety technology directly into their machines.
Fort Robotics
May 17, 2022
Follow Us