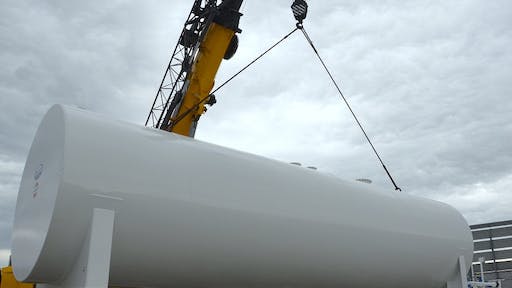 What can Brown do for you? For a start, it's making your world greener by using cleaner burning biodiesel. The United Parcel Service (UPS) began using biodiesel blends at its most vital hub in Louisville, KY, this month.

"There is a finite amount of petroleum-based fuel available from our planet so it is important that UPS and other companies invest in ways to use alternative fuels and technologies, including biodiesel," says Scott Wicker, UPS Chief Sustainability officer. "This project helps us reduce our dependence on fossil fuels with the added benefit that it will also reduce air pollution and carbon emissions."

UPS recently installed a biodiesel fuel tank and fueling station at its Worldport facility. It will allow fueling operators to blend specified percentages of biodiesel "on the fly," starting with 5% biodiesel (B5), and working up to 20% biodiesel (B20).

The single most important point in all of UPS's global operation, Worldport:

The 30,000 gallon biodiesel tank and station at Worldport fuels nearly 200 vehicles and diesel-fueled equipment, most of which help load packages on and off the planes.

The National Biodiesel Board called UPS's switch to biodiesel monumental.

"For a giant like UPS to use biodiesel is not only an outstanding vote of confidence for biodiesel, but an example of how America's first advanced biofuel will fuel the drive towards genuine corporate sustainability," says Joe Jobe, CEO of the National Biodiesel Board.

Since biodiesel blends of up to 20% can be used in any diesel engine without modifications, it is one of the easiest and most cost-effective ways to clean up heavy-duty equipment.

"Biodiesel supports green jobs and domestic energy security here and nationally, and we commend UPS for making biodiesel a part of its commitment to sustainability," says Melissa Howell, executive director of the Kentucky Clean Fuels Coalition.