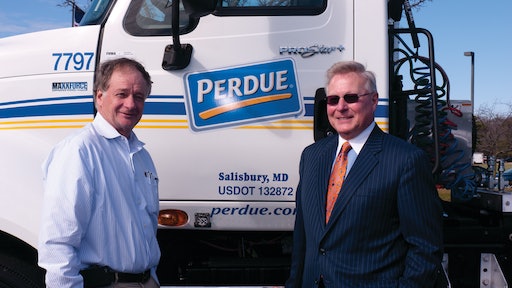 “We’re proud to present Perdue Farms with our Strategic Partnership Award,” says Jim Hebe, Navistar senior vice president, North American Sales Operations. “We view Perdue as more than just a great customer—we see them as a true, collaborative business partner where we both push each other to bring new thinking and create a higher level of efficiency and productivity through integration.”

Perdue challenged Navistar and Barr International to develop an ultra-lightweight version of its International ProStar+ tractor – based on Perdue specifications — capable of hauling 49,000 pounds of dressed poultry to market—an initiative Perdue named “Project 49er” after the desired payload capacity.

Working together with Perdue Farms over a nine-month period, Barr International and Navistar’s product development group were able to bring to market an ultra lightweight 56 in. sleeper tractor. Filled with 150 gallons of fuel, the Perdue spec ProStar+ 56 in. sleeper tractor weighs in at 15,920 lbs.—up to 1,000 lbs. less than a similarly spec’d competitive model. As a result of the lightweight spec, Perdue has achieved significant fuel economy improvements, maximized its payload capacity and reduced its carbon footprint.

“We’re honored to be recognized by Navistar and Barr International,” says Mike Levengood, vice president of live operations, transportation and logistics for Perdue. “The innovation and responsiveness to our needs have brought about some great changes to our truck fleets that are having a significant impact on our bottom line.”

Another key point of collaboration between Perdue, Navistar and Barr International was to leverage Navistar’s Diamond Logic electrical system for the ProStar+ tractor to better integrate tractor-trailer driver controls from the cab and improve vehicle performance.

Leveraging the Diamond Logic electrical system, Navistar engineers were able to develop a control system built into the truck dash controls to perform all trailer functions as well as PTO (power take-off) needs for the hydraulic system for Perdue’s feed delivery fleet.

Through Diamond Logic’s multiplexing electrical architecture, Navistar was able to integrate the controls of the feed trailer—controls for lights, top door openings, boom positioning (up, down and side-to-side) and augers on or off. Previously, these controls had to be installed in the cab of the tractor with multiple electrical connections. Controls were separate and not integrated—any warning lights or alarms required separate wiring. By leveraging the Diamond Logic system, Perdue was able to:

The Diamond Logic in-cab electrical system provides Perdue with a number of unique programming options not previously available, including the ability to raise an auger boom as high as 40 ft. Trucks are now programmed to have visual and audible alarms any time the truck is moved with the boom out of the saddle.

PTO controls are now set to prevent shock load to PTO and transmission, with the driver required to use the clutch to engage the PTO 100% of the time. While Perdue initiated other redesigns to their PTO pump hydraulic set up, the Diamond Logic controls have helped reduce failures in the system from as high as 75% to less than 10% per year. Perdue now believes its hydraulic pump might out-live the truck itself without failure.

Performance and efficiency of the hydraulic system has allowed Perdue to run at lower RPM speed for PTO operation, which saves substantial amounts of fuel. By having the flexibility to fine tune the programming for engine RPM with PTO running along with allowances for engine surge, feed can be unloaded more quickly with little driver intervention and maximum fuel efficiency.

“At Perdue, we’ve made major advances and investments in projects that support our commitment to environmental stewardship, such as the installation of one of the largest commercially owned solar power systems in the eastern U.S., a biogas-to-energy project in Kentucky and a biomass burning installation in our North Carolina soybean processing plant,” says Steve Schwalb, vice president of environmental sustainability. “However, we’re also committed to exploring every step in our supply chain to identify opportunities for small improvements, which when multiplied, yield significant advances in reducing our carbon footprint. The environmental benefits gained with our truck fleet are a perfect example of that.”

Alternatively powered equipment and components aimed at improving efficiency and reducing emissions were among the highlights at this year’s show.
Sara Jensen
April 18, 2019
Follow Us