Phillips Industries has made a redesign to its PERMAPLUG connectors which now feature a thick rubberized sealing component. 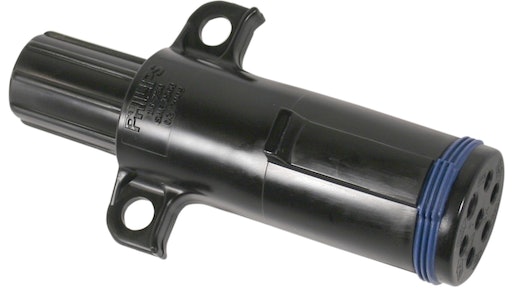 Phillips Industries is making an exciting patented change to improve the performance and extend the life of its PERMAPLUG. The revision is simple, yet ingenious, and the first of its kind.

Phillips has added a sealing component to its PERMAPLUG to create the WEATHER-TITE PERMAPLUG. It’s the same PERMAPLUG that the industry has grown to trust for superior performance, only now with a thick rubberized protective seal. The WEATHER-TITE seal, first introduced earlier at this year’s TMC, has a three-blade Nitrile wiper seal to lock out the elements and corrosion causing chemicals.

Phillips Industries leads the industry in testing and development of products to stop magnesium chloride from entering truck and trailer electrical systems and causing damage. “Damage can be costly from unscheduled downtime, interruption in electrical power and even potential electrical arcing caused by moisture and contaminates in the socket. We felt a real need to improve this connection for safety as well as the longevity of the product. Connectors with the new WEATHER-TITE seal keep contaminants from damaging the electrical system,” comments Bob Phillips, CEO and President.

Adding the WEATHER-TITE seal to the PERMAPLUG will come as a running change, starting August 16, 2012 and will become standard on Phillips electrical assemblies currently outfitted with PERMAPLUG connectors.