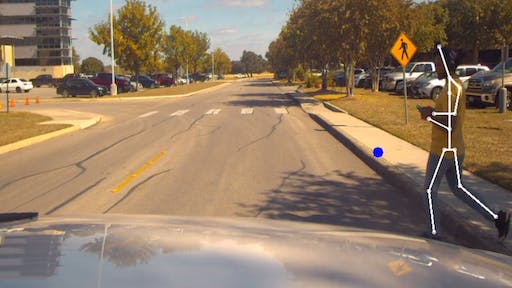 “For instance, if a pedestrian is walking west, the system can predict if that person will suddenly turn south,” says SwRI’s Samuel E. Slocum, a senior research analyst who led the internally funded project. “As the push for automated vehicles accelerates, this research offers several important safety features to help protect pedestrians.”

Recent accidents involving automated vehicles have heightened the call for improved detection of pedestrians and other moving obstacles. Although previous technologies could track and predict movements in a straight line, they were unable to anticipate sudden changes.

People draw on experience and inference when driving near pedestrians and cyclists. SwRI’s research is a small step for autonomous systems to react more like human drivers.

“If we see a pedestrian, we might prepare to slow down or change lanes in anticipation of someone crossing the street,” says Dr. Douglas Brooks, a manager in SwRI’s Applied Sensing Department. “We take it for granted, but it’s incredibly complex for a computer to process this scene and predict scenarios.”

Applications for the project, titled “Motion Prediction from Sparse Skeletal Features,” include human performance, automated vehicles and manufacturing robotics. The algorithms can work with a variety of camera-based systems, and datasets are also available to SwRI clients.