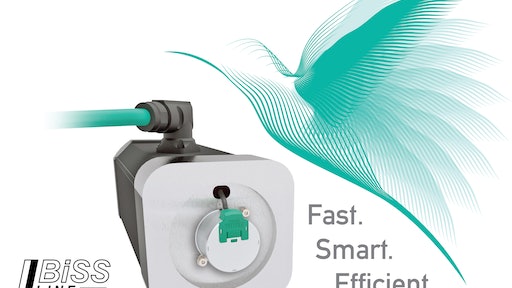 Single-cable technology involves the transmission of power and encoder signal in a single cable. The one-cable approach offers significant benefits for smaller motors where the placement of two connectors has always been awkward because of the lack of space. Moreover, reduced cabling reduces costs, while reducing the number of connectors reduces susceptibility to connector failures. A special feature of the BiSS Line interface is the implementation of the Forward Error Correction function (FEC), which improves availability of data communications, even with faulty cables and plug connections. "All in all, BiSS Line is an ideal interface for servomotors - and not just for cost reasons, but also for optimized performance," says Christian Fell, POSITAL’s VP of Technology and General Manger for the Americas. A 4-wire solution (with separate conductors for communication and power supply) or a 2-wire variant (with combined communication and instrument power supply on a wire pair), are also available, based on the same communications protocols.

From their original introduction, the new motor feedback kits were available with vendor-neutral digital communication interfaces such as BiSS-C or SSI for absolute measurements. "A number of optical feedback systems on the market make use of proprietary interfaces such as Hiperface or Endat, which means an ongoing dependency on the encoder manufacturer. We deliberately took a different approach," emphasizes Fell. "We are whole-hearted advocates of open-source interfaces - and stick to them consistently." POSITAL’s commitment to the open-source strategy is affirmed by the fact that the encoder manufacturer is a founding member of the BiSS Association e.V. This new user organization, founded at the end of September, is committed to promoting the distribution of the free-of-charge BiSS family of open-source communication protocols worldwide.

The MHM5 and MHK5 encoders feature Ethernet/IP or Profinet interfaces for use in advanced industrial and mobile equipment applications.
Sensata Technologies, Inc.
January 15, 2019