Trimble has partnered with Piaggio Fast Forward to integrate technology into Boston Dynamics' Spot robot which enables it to autonomously follow humans and machines. 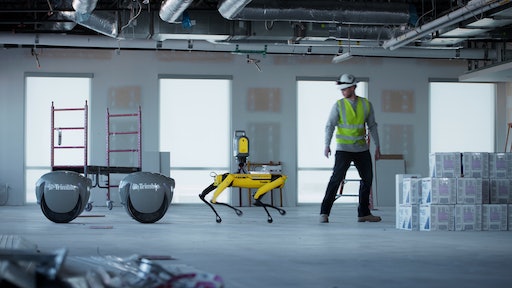 Trimble has partnered with Piaggio Fast Forward (PFF)—a developer of smart following technology—to create a proof-of-concept solution which enables robots and machines to follow humans and other machinery in industrial applications.

The companies have integrated a patent-pending PFFtag smart following module prototype developed by PFF onto a Boston Dynamics' Spot robot. The robot is controlled by Trimble's positioning technology.

Incorporating these technologies into the robot eliminates the need to solely control the robot via joystick notes Trimble in its press release announcing the collaboration. Trimble says the proof-of-concept system could be applicable for various industries including construction, mining, agriculture and logistics.

Trimble first began working with the Spot robot technology in 2019; in November that year announced a collaboration with Hilti and Boston Dynamics to explore the potential of integrating its technology into the robot platform for use in heavy-duty applications. The aim is to help improve safety and efficiency in the sometimes challenging environments in which construction, mining and other industrial applications operate.

The autonomous robot can more easily move over terrain and get into spaces larger equipment cannot, or in places that would otherwise be dangerous for humans to enter. This keeps people safe while still enabling work to get done. In some cases, it can also take over tasks, leaving human workers free to focus their efforts on other aspects—which could be beneficial as workforce challenges continue to plague many of the heavy equipment industries.

Several manufacturers have been evaluating the potential for mobile robots in heavy-duty off-highway applications. For instance, AGCO's Fendt brand has developed the Xaver platform which consists of a swarm of robots which can move through a farm field collecting data to optimize planting of crops. Use of these types of machines has grown as automation technology continues to improve and become more accessible, and will likely continue doing so in the coming years.

PFF has spent several years researching how people navigate the physical world. It has used that knowledge to create technology which improves efficiency through more intuitive collaboration between humans and machines.

“Most robotics companies look at the world as a world of obstacles,” said Greg Lynn, PFF’s Chief Executive Oﬃcer, in the Trimble press release. “At PFF, we adopted the opposite approach and this philosophy has fueled our research of how humans and robots physically move through space. We design behaviors that understand people and help automate tasks so you don’t have to build complicated hardware. Working with Trimble to boost the process of replacing remote-controlled robots traveling on predetermined paths in mapped environments enable yet another step in the ultimate goal of providing safe and intuitive operations of machines in industrial environments. Dynamic following technology is one step closer to kicking the doors open to further implementation—from power tools to farming equipment to even automated vehicles."

With PFF's smart following technology, PFFtag, the robot follows humans and machines instead of being controlled via joysticks by a person either on site or in a remote location. PFFtag allows companies to use its algorithms to then have their software communicate with PFF's software. According to the Trimble press release, this enables a human to control the robot via pairing and improves the robot's ability to sense direction and velocity as it follows the leader.

Users simply need to push a button to activate a fused sensor array which pairs to a leader that navigates a robot or machine like Spot in dynamic environments. No special training is needed or additional accessories such as an app or tablet. Trimble says in its press release this can create a wider range of applications for existing machines and positively impact productivity, safety and quality of work.

“Robots are a growing presence in our lives, both private and professional, helping to make human activities less burdensome and more efficient. When technology and robotics are put at people’s service, I believe they can play a significant role in transforming individual mobility and re-defining workplaces and urban environments to make them more sustainable and people-friendly, and so help create a better future,” said Michele Colaninno, founder and chairman of Piaggio Fast Forward.

Trimble has conducted testing of the concept by equipping a Spot robot with its laser scanning or Global Navigation Satellite System (GNSS) sensors and PFFtag technology. The robot was used at a customer site in Colorado over the course of 2 months.

“The follow-me technology by PFF provides an intuitive user experience and opens the door to collaborative robots that can augment the human workforce,” said Aviad Almagor, division vice president, Trimble’s Emerging Technologies. “Like, a 21st century Sancho Panza, robots with PFFtag, may have the future ability to assist construction professionals in their daily workflow, carry heavy equipment, improve efficiency and enhance workers safety.”