Scania to celebrate fuel-economy champions from across Europe

Scania Fuel Masters is an interactive competition allowing Euro 5 and 6 truck drivers to compare their most fuel-efficient journeys. 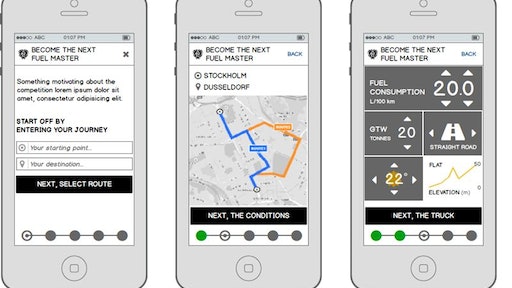 Scania Fuel Masters, a new interactive competition site being launched by Scania in October, will allow drivers to compare their most fuel-efficient journeys with each other via their mobile phones. The site encourages drivers to compete for prizes from Scania and win the recognition of their peers.

“This is one more way in which Scania is making clear how focused it is on low fuel consumption,” says Björn Fahlström, Vice President Product Management for Scania Trucks. “Scania has been extraordinarily successful with its Euro 6 powertrains in a large number of independent consumption tests that have been published in the media over the past few years. Now, we want to give the real heroes – the drivers – an easy-to-use forum for showcasing their best performances behind the wheel.”

The Scania Fuel Masters competition will run for eight weeks and is open to all drivers who drive Euro 5 and Euro 6 trucks, regardless of vehicle brand.

“We’re seeing a big change in driver behavior,” Fahlström says. “Thanks to Scania having more than 140,000 connected vehicles on the road, we’re able to follow what is a steady decrease in fuel consumption per tonne-kilometre. Apart from all the product development on our side, it is clear that factors such as driver training and increased awareness of what low fuel consumption means for total operating economy and sustainability are also contributing significantly to steadily falling consumption.”

Taking part in Scania Fuel Masters is simple. Drivers report their results via an app through which they also provide their vehicle data, gross train weight (GTW), road conditions and weather, together with a picture of the vehicle. It is up to the drivers themselves to determine whether, for example, 36.5 liters per 100 kilometers is a good result for a Scania G 450 6x4 tractor unit travelling between Warsaw and Gdańsk in heavy rain with a machine trailer and excavator.

With other drivers able to give a Like “honk” to journeys as they are posted on the Fuel Masters site, Fahlström is confident that there won’t be any foul play. “It goes without saying that you will be scoring an own goal if you provide ludicrous results,” he says.

As well as reporting their driving performance, drivers can find tips on the site from a Scania coach, plus a quiz with Scania-related questions. The tips are delivered in the form of a short film featuring Cem Kizilkaya, a well-known driver coach at the Scania Transport Laboratory in Söder­tälje, Sweden. A jury of four qualified Scania employees will choose three winners each week to receive a Scania Watch. All types of trucks can compete, with the jury taking the type of vehicle and assignment into account.

Fahlström says that although it might seem odd to let drivers of other vehicle brands take part in the competition, Scania has nothing to fear. “Scania’s confidence is well placed in terms of what its vehicles and services deliver in terms of performance and quality,” he says. “That means we have nothing to fear from other drivers taking part. They can also do a good job within their own parameters.”