Volvo will implement stop days across its global truck manufacturing operations, and anticipates impacts to other business areas as well. 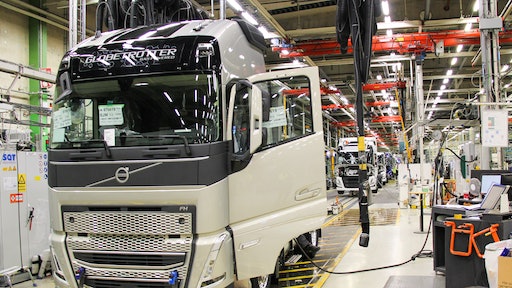 Volvo Group announced on March 22 the global shortage of semiconductors will substantially impact the group's production in the second quarter of 2021. Because of this, the company says it plans to implement stop days across its global truck manufacturing operations.

Per a press release from Volvo, the stop days are currently estimated to be between 2 and 4 weeks depending on the production site.

Volvo says it anticipates production disturbances in its other business areas, as well. The company is also forecasting a negative impact on earnings and cashflow due to these disruptions.

Currently, the global supply chain of semiconductors and some other components is strained. This is due in part to the quick ramp up in manufacturing production in many sectors as economies began to recover at the end of 2020. There has also been an increased demand for semiconductors from various industries including personal electronics—which increased during the global pandemic because people were home more.

Production levels for semiconductors are uncertain. While markets are recovering, it is taking time for manufacturers to get workers back after either having to let them go during the pandemic or increase production capabilities while still maintaining safety protocols due to the continued presence of COVID-19.

Several industry research firms have noted the potential negative impacts of the semiconductor shortage. To date the majority of the impacts have been felt in the passenger vehicle space with companies such as General Motors and Ford announcing production issues.

However, heavy truck demand has been strong and is anticipated to remain so throughout the year; as semiconductors are a common component in heavy trucks it was only time before the shortages would impact this and other industries as well.

In February, U.S. President Biden signed an executive order to address the global shortage of semiconductor chips. It will review current supply chains and ways to diversify it. As manufacturing for this product has been outsourced over the years to other countries like China, the president is looking at ways some of that could potentially be brought back to the U.S. or other countries with which trade relationships are better.

This of course will take time, and until then OEMs like Volvo will have to take actions to limit the negative impacts of the shortage to itself and customers as much as possible. Volvo says it is working to minimize the number of vehicles affected and impacts to customers, and keeping its operations flexible so production can be increased when possible.