Volvo CE announced at INTERMAT 2012 its plans to expand production facilities and introduce over 60 new products globally during 2012.. 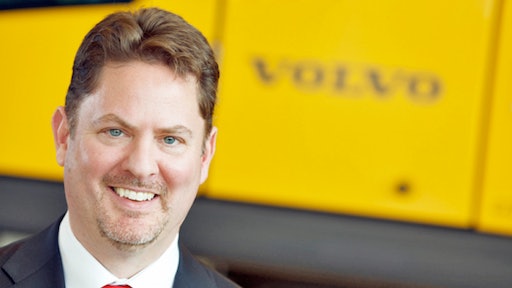 Volvo Construction Equipment (Volvo CE) used its international press conference at the INTERMAT 2012 exhibition in Paris to reiterate the company’s pledge to customers – recently demonstrated by its expansion of production facilities and distribution networks in Europe and North America. The company also outlined investments in other international markets and announced the introduction of over 60 new products globally during 2012.

President and chief executive Pat Olney began the press conference by highlighting the generally improving – albeit uncertain – trading conditions, both in the European market and globally. These brightening prospects were mirrored by improvements in Volvo CE’s own fortunes, which in 2011 saw sales increase by 21%, a record 84,000 machines sold, and the company becoming a market leader in the important Chinese wheel loader and excavator market.

Olney also used the press conference to announce the introduction of over 60 new products to the range in 2012. In addition to the 55 new products that were launched in 2011, together these equate to the most fundamental overhaul of the company’s product portfolio ever. He also underscored Volvo’s technological leadership, by emphasizing the company’s success in launching its fuel efficient Stage IIIB/Tier 4 Interim emissions compliant range of engine systems. These products will go some way to helping the company achieve its World Wildlife Fund (WWF) Climate Savers commitment of reducing CO2 emissions from its machines sold between 2009 and 2014 by 15 million tonnes.

Olney took the opportunity to discuss Volvo CE’s investment program at its European factories and the expansion of its European distribution network. Russia features in both aspects, with excavator production set to begin in 2013 from a new factory in Kaluga, while the dealer network in Russia is set to double by 2015, to 90 locations (up from today’s 45). He also gave updates on the progress of on-going investments in India, Brazil and China, where capacity and product expansion programs are strengthening Volvo’s ability to serve its growing customer populations. (Volvo CE has been the market leader for excavators and wheel loaders in China, together with its joint venture partner SDLG, since 2011.)

“Despite short term uncertainties in some markets there is much to be positive about in the current trading conditions,” Olney said. “We are continuing to invest throughout the business cycle in our people, our production facilities and distribution networks. With a technologically advanced fleet of innovative – and award winning – products, Volvo CE is not only optimistic about the future, we are also well placed to deliver quantifiable benefits to customers around the world.”