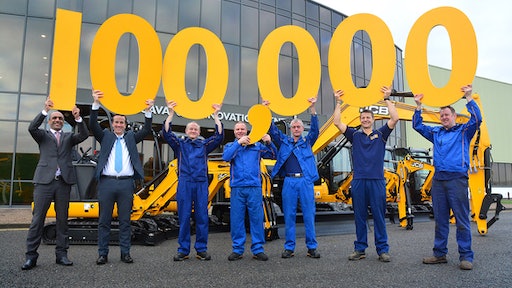 JCB has celebrated the production of its 100,000th compact excavator with the promise of more innovative machines to come. The building of this 100,000th machine comes as JCB continues to grow its market share in this popular North American equipment category.

JCB’s first compact excavator – an 801 model weighing in at 3,307 lbs./1.5 T – rolled off the production line of in 1989, a year when the global manufacturer produced just over 450 machines. By 1992, JCB’s compact excavator range had expanded to four models with 1,000 units produced annually.

JCB CEO Graeme Macdonald says, “JCB has an innovative, powerful and robust range of compact excavators which keep growing in popularity. From being a challenger in the market 25 years ago, JCB is now firmly established as an industry leader, setting trends for design innovation and manufacturing excellence.

“To have produced 100,000 compact excavators is something for the whole JCB team to celebrate, and with more additions to the range due later this year, we look forward to more growth in this important sector of the market.”

JCB has recently capitalized on the growing opportunity presented by the compact excavator sector by investing $22 million in manufacturing technology and new product development. Over the past 2 years, this investment has led to the launch of brand new models including the 67C-1, 85Z-1, 86C-1 and 100C-1 models which compete in the 13,000–22,000 lb./6, 8 and 10 MT weight categories.