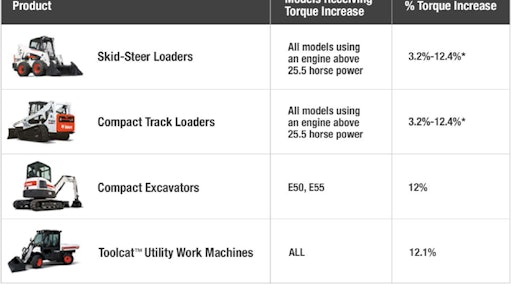 There are a couple of truths about the current engine market – there is no one-size-fits-all approach and nobody builds engines without outside expertise.

The result is an engine with a powerband  which is designed for the specific applications of Bobcat compact construction equipment. Different types of equipment require different powerbands to maximize efficiency. Knipfer relates the powerband to a bulls-eye. Keeping the operator in the peak powerband for the engine is like hitting the bulls-eye on a performance target. “The game we are playing is either you hit the bulls-eye or you lose. What you lose is a significant amount of machine performance.”

The size of the bulls-eye (powerband) necessary directly relates to the application of the equipment. For example, Bobcat compact machines benefit from a wide powerband.

Since the Bobcat machines handle a wide variety of tasks, a wide torque band is advantageous. “Engines are designed for the size of the peak operating range they have,” notes Knipfer. Compact equipment can be digging one minute, lifting the next and then pushing. “So with compact equipment our loads are constantly varying by a great amount.” A wider torque band is needed to keep the engines running in the peak operating range.

With a wider peak operating range, it’s easier to keep the machine operating at peak performance with the varying loads. You are never operating too far from the peak torque. “Now the expert operator is going to be hitting the bulls-eye all of the time and the inexperienced operator is going to be in there a lot more often; most who operate Bobcat equipment will now be able to take advantage of the full performance of the machine.”

The torque curve necessary to make this happen is a lot different than a narrow powerband that may be desirable with equipment that runs at a steady state, such as generators, ag tractors, big trenchers, dedicated horizontal drills and chippers. By using a narrow powerband in these applications, the engine can be tuned to run consistently at maximum peak torque, yielding maximum efficiency. “While a 6.5% difference in torque when you are loading up a bucket of dirt on a skid steer isn’t a big amount of variance because the task takes about five seconds, an ag tractor or trencher running all day long, that becomes a more significant amount of performance,” says Knipfer.

With the goal of producing a wide powerband and engines that are easy for the user to operate, Bobcat has begun rolling out its own brand of engines which will not require the use of a diesel particulate filter (DPF). Recently, the company provided a closer look at its latest engine technology – and the other benefits it offers, including up to 12% more torque depending upon the application.

Bobcat initially rolled out a 2.4-liter engine in November. This will be followed by the launch of a 1.8-liter engine and finally a 3.4-liter engine in 2015. Like other Tier 4 engines they will utilize common technologies, including cooled exhaust gas recirculation (EGR), a high-pressure common rail fuel system and a diesel oxidation catalyst (DOC). And the 3.4-liter Bobcat engines (to be introduced in 2015) are expected to need selective catalytic reduction (SCR) to be certified Tier 4 Final. The technology requiring diesel exhaust fluid (DEF) to help catalyze oxides of nitrogen (NOx) out of the diesel exhaust stream has been appearing on truck engines and larger off-road engines for some time. At present, it’s considered to be a necessary step for compliance in many engines.

What makes the Bobcat engines unique is a specially designed combustion chamber that allows for ultra-low particulate matter combustion (ULPC). While this involves proprietary design and is more complicated to achieve than it sounds, it is really about fuel and air.

“The amounts of each that you use, the specific times that they are used and the pressure that they are injected into the combustion chamber – you manipulate all of those things in the exact right manner and the result is you get a much cleaner combustion process in terms of particulate matter,” says Knipfer.

Unlike a DPF that requires the operator to interact with the engine to keep it running properly, the technologies on the Bobcat engines are managed by the electronic control unit (ECU) and most of the time the operators don’t even know they are there.

Electronically controlled, high pressure, common rail fuel injection that provides multiple injections per firing cycle is a core element of the engine technology. By varying the fuel pressure, Bobcat engines can change the engine cylinder pressure to match conditions. This has allowed Bobcat to increase the torque across the product line with its Bobcat branded engines above 25.5 hp from roughly 3 to 12% despite being slightly smaller in displacement than the engines they replace. “The way we get more torque is we have higher amounts of combustion pressure,” says Knipfer. “Our engines are designed to be more robust to be able to more adequately handle more pressure and torque.”

But not every job requires maximum torque; for instance, there are light-duty attachments such as angle brooms, or situations like driving across a jobsite. The Bobcat engines can automatically monitor and vary the combustion pressure to produce the proper amount of torque for the job. “Less torque for these jobs is required. The engine catches it and reduces the engine combustion pressure,” says Knipfer. “The result is less engine noise and better fuel efficiency at that moment.” But this is highly dependent on application. “If you have somebody who pushes the machine to its limits most of the time they are probably not going to see a reduction in noise or improvement in fuel efficiency versus somebody who performs more light-duty operations.”

For this reason the Bobcat engines were designed with a broad torque curve. In the graph on page xx, a 600 rpm wide torque range is seen, with only a 6.5% difference in torque. In compact equipment applications this wide torque range is an advantage as it allows operators to keep the machine in the desired torque range with the variable loads. With more narrow torque range a significant amount of performance is lost in the machine. With the wider torque range, both novice and expert operators will consistently be in the preferred region of the torque band.

Electronics are the key to making the systems work. “There are a lot of things monitored on these engines,” says Mike Fitzgerald, Bobcat Loader Product Specialist. “We monitor the engine rpm. There are NOx sensors on the engine, the crankshaft has a sensor, and the pressure of the fuel going in is monitored. Then we monitor exhaust temperatures on the backside. There are a lot of different things that work in conjunction with one another to tell us how the engine is operating.” This then determines how the engine will respond. “To give you an idea, the high pressure common rail fuel system at idle may be 15,000 to 17,000 psi. At a higher load it will run 20,000 plus up to potentially 30,000 psi. It varies according to what is required.” Software monitors a lot of different inputs and varies engine response accordingly.

Another benefit of the Bobcat engine that will not be immediately obvious to customers is that it provides consistent power throughout the life of the engine. Most diesel engines provide negligible power loss through most of its life. “But there is a certain point you start noticing that it doesn’t have the power that it used too,” says Knipfer. “That happens with engines because they wear and become a little less efficient. They just do not have as much power or torque as they did when they were brand new.”

Just like any engine, the Bobcat engines are subject to the same type of wear; however, they will not lose the power or torque. “The Bobcat engine can manipulate the combustion pressure as the engine ages. At the point where the engine starts getting a little bit less efficient, the Bobcat machine will compensate and increase the combustion pressure a little bit to keep the power consistent,” says Knipfer.

New Eagle partnered with Kolberg-Pioneer to develop an electric architecture for a rock crusher.
New Eagle LLC
May 6, 2019

Ricardo has signed an agreement to supply American Maglev Technology with magnetically levitated rail cars that will be used for a transportation system in Orlando, FL.
Ricardo plc
March 18, 2015
Design Firms

CCAT has been named an Innovation Center under MassDevelopment's Manufacturing Innovation Grants program to help further the development and growth of small-to-mid-sized manufacturers.
February 27, 2015
Design Firms

Ricardo is finalizing the necessary processes to establish a defense subsidiary that will be located within its existing Detroit Technology Campus.
Ricardo plc
February 27, 2015
Design Firms

Ricardo is partnering with Cooper Corp. to develop a new line of Cooper diesel and CNG engines ranging from 3.5 to 1,000 KVA.
Ricardo plc
February 25, 2015
Design Firms

TMAT has been acquired by Blachford Acoustics Group, helping it expand its presence into Europe.
TMAT
December 15, 2014
Design Firms

Tata Technologies has teamed up with the Detroit Lions and Athletes for Charity to expose more students in Detroit Public Schools to STEM courses.
September 22, 2014
Design Firms

Strategic shifts in emphasis and focus

ACS has been named one of The Top 100 Design-Build firms as well as one of The Top 400 Contractors due in part to its growth in the U.S and around the world.
ACS
September 4, 2013
Design Firms

An engineering design firm adds manufacturer to its title after an OEM requests a brake design and the manufactured product, mirroring the firm’s desire to diversify and stabilize an otherwise fluctuating and inconsistent business.
Michelle Kopier
September 19, 2012

BMT WBM will be showcasing its products and services related to improving mining operations and maintenance during MINExpo 2012.
BMT WBM
September 5, 2012

An exodus from the easy road

Focusing With a Wide View

Independent design firms may have the recipe for a successful launch.
December 15, 2010
Follow Us