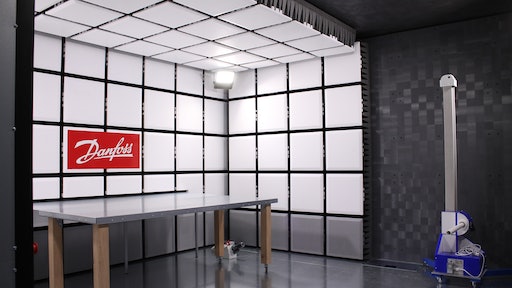 Danfoss Editron has opened a new in-house testing laboratory in Lappeenranta, the Finnish city where it is headquartered, following a multi-million EURO investment. The facility will conduct electromagnetic compatibility (EMC) and environmental tests, which guarantee the quality of the company’s EDITRON systems to its customers.

Introducing in-house facilities will allow Danfoss Editron to test its systems and machines at an earlier stage of the manufacturing process than ever before. It will also enable the company to identify potential issues earlier, when problems are easier to fix than at later stages of product development.

Commenting on the opening of the laboratory, Danfoss Editron’s Hardware Engineer Jussi Hämäläinen says, “Previously, all of our EMC and environmental tests were performed at external facilities outside of the Danfoss Group, which created several challenges. It was easy for the queue of products that required approving to bottleneck, due to limitations with the testing facilities, while testing needed to be planned and booked several months in advance. While many of our projects are currently in prototype phase, serial production is expected to start within three years so the need to invest in our own EMC and environmental testing facilities was clear.”

Danfoss Editron’s Research and Development Director Tero Järveläinen adds, “Having in-house testing facilities will enhance our product quality and support our business growth targets to achieve a turnover in the hundreds of millions of EUROS. We have already started to see the benefits of having our own testing equipment, especially in our research and development activities. We’ve been able to improve the way our products behave with regards to conductive emissions, while we’ve also proved that we can verify design improvements quicker than when we used external testing services. Overall, this is a significant investment and improvement in the quality and reliability of the products we design, manufacture and deliver to our customers globally.”

The laboratory’s EMC test chamber is already performing tests, assessments and checks. The remaining testing capabilities are expected to enter operation in a few months’ time.