Tognum Researching Engines Of The Future 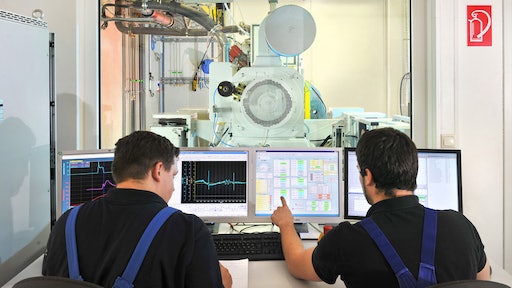 Tognum, the specialist for propulsion and power solutions, is conducting research on diesel and gas engines of the future at its `SKL Motor´ subsidiary in Magdeburg. Saxony-Anhalt‘s Minister-President Dr. Reiner Haseloff presided over a symbolic ceremony at which four new single-cylinder test stands went into operation. The facilities will be used by the company’s specialists to develop new combustion processes, fuels and combustion chamber geometries for the development of engines at the Friedrichshafen location of the Tognum brand MTU. The regional government of Saxony-Anhalt is supporting the high-technology R&D program to the tune of several million euros with a total of €10 million being invested in the test stands. And to implement the program, the workforce at SKL Motor in Magdeburg has again expanded with 225 employees now working in the R&D and Production sections.

“There are numerous reasons why we are constantly developing cleaner and more fuel-efficient engines and drive systems: For us, meeting increasingly stringent regulations is a technological challenge. For a globally active company such as ours, it is a duty and for company such as Tognum which places great value on sustainable approaches, it is the practical expression of our responsibility,” said Dr. Ulrich Dohle, Tognum Executive Board member for Technology & Operations, during a visit to the Minister-President. Today, MTU engines outputting up to 9,100kW (approx. 12,200 bhp) already meet demanding exhaust regulations which are not yet in force but which will in future govern the operation of engines powering locomotives, giant mine vehicles, ships and electricity generators. In Magdeburg, the Tognum Group is looking even further into the future and is researching technology concepts which do not even exist yet. Of course, projects such as these do not work with full engines with up to 20 cylinders. Instead, they use `single- cylinder´ engines because the same processes are duplicated in each individual cylinder. “The results of this research provide vital foundations from which our team in Friedrichshafen can develop engines which will not appear in the marketplace until many years later,” says Dohle. At SKL Motor in Magdeburg, 10 specialists are currently engaged in this exclusive area of development and that number is set to rise to 15 in the near future. The Tognum Group has invested around nine million euros in constructing and equipping the R&D test stands and about €2.5 million of that were provided by the Region of Saxony-Anhalt.

“Magdeburg is a very interesting location for the Tognum Group,” explains Dohle, adding that the long-established company which the Tognum Group took over in 2008 stood for expertise and enthusiasm in the field of internal combustion engines. “The Tognum Group has invested €18 million since it took over the facility,” says SKL Motor CEO, Wilfried Probian. The workforce has tripled to its current level of 225 and SKL does not simply recruit the experts it needs on the open market - it also trains them itself. “We currently have 30 trainees, giving us a training rate of over 15%,” says Probian.

In the meantime, SKL Motor has become part of the Tognum Group’s global organization and R&D work which paves the way for the engines of the future. “Magdeburg plays an important role in our global production and after-sales network,” says Dohle. SKL Motor is the technology center for standard reconditioning of used engines. In this process, engines which have, for example, logged up thousands of hours of operation in locomotives or gensets are completely stripped down and individual components are reconditioned so that they are in effect brand-new. Within a very short space of time, the customer gets an engine which is literally `as new´ with a full service life lasting thousands of hours ahead of it once more - powering one of Great Britain’s High Speed Trains, for example. This `remanufacturing´ process not only saves money, it also conserves scarce raw materials resources. The team at the Magdeburg location also overhauls main engine components which are then distributed to customers via Tognum‘s global sales network and SKL still manufactures spare parts for engines as it has traditionally done. In addition, the company also assembles gensets for the Tognum brand MTU Onsite Energy. Powered by MTU engines, these gensets provide the reliability needed for the generation of peak and continuous power as well as emergency power for locations such as hospitals, shopping malls, industrial complexes and airports throughout the world.