Hatz will exhibit its 4H50TI engine designed specifically for export countries where only high sulfur diesel fuel is available at INTERMAT, as well as its 4H50TIC DPF. 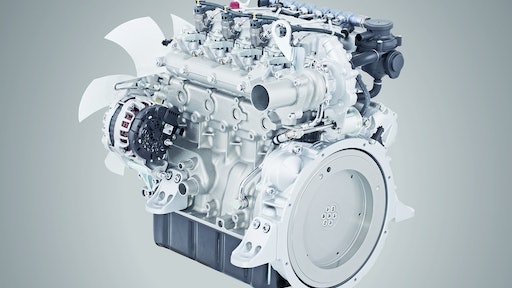 With the two engines 4H50TIC DPF and 4H50TI (Tier 2/Stage II), Hatz Diesel celebrates the world premiere of two more variants of the 4-cylinder turbo engine at INTERMAT 2015 in Paris. In total, the 4-cylinder 2-liter industrial diesel engine 4H50TIC, equipped with the Bosch common rail system, adds up to a total of three variants, which, depending on the exhaust aftertreatment, are now available worldwide. In addition to the H Series, the already known 4L43C represents the 3- and 4-cylinder models of the L and M Series, which are equipped with a diesel particulate filter (DPF) in order to meet the stringent requirements of the US EPA Tier 4 Final, the EU 97/68 stage IIIB and the OAPC in Switzerland. Thus, the L and M Series engines are the only remaining air-cooled engines in the 56 kW class to meet the current emission regulations in the EU and US. Furthermore, the Hatz diesel engines of the B, D and G Series in the class below 19 kW are US EPA Tier 4 Final certified and will be presented at the stand of the German engine manufacturer.

The newly developed 4H50TIC, which has been manufactured since the beginning of 2014, will be presented at INTERMAT for the first time in a variant without exhaust aftertreatment: the 4H50TI. By adapting existing components such as common rail injectors and high-pressure pump and because of the elimination of sulfur sensitive components such as exhaust gas recirculation (EGR) and oxidation catalyst (DOC), the engine can be operated with diesel fuel with a sulfur content of up to 5,000 ppm. This is in particular important for many markets in Africa, South America and Asia. The 4H50TI is compliant with the emissions legislation of the US EPA Tier 2 and EU 97/68 Stage II in the range up to 62 kW output, as well as the EU 97/68 Stage IIIA in the range below 37 kW. The latter applies in particular to the operation as a generator with engine speeds of 1,500 and 1,800 rpm.

Because of the elimination of the exhaust aftertreatment and due to the requirements of the emissions legislation, the 4H50TI can be operated with higher performance. The maximum output is 62 kW and the maximum torque 265 Nm. With just 158 kg, the total weight of the 4H50TI is considerably less compared to the Tier 4/Stage IIIB version, the 4H50TIC. Because of the elimination of the EGR, the specific fuel consumption of 218 g/kWh at the best point is slightly higher than the values of the basic engine. The 4H50TI will be available from autumn 2015.

The 4H50TIC DPF, which will be presented at INTERMAT for the first time, is equipped with a separable diesel particulate filter (DPF) and oxidation catalyst (DOC) and compliant with the Clean Air Act (LRV) of the Federal Office for the Environment (FOEN) in Switzerland and registered in the corresponding particulate filter list. The latest Hatz engine complies with the requirements of the Air Pollution Control Ordinance and can be used in applications which are operated in Switzerland. Through the use of the particulate filter in conjunction with the certificate of the FOEN, the 4H50TIC DPF may also be used in areas where special demands for the exhaust aftertreatment apply. For example, for underground use, tunnel construction as well as in emission-sensitive metropolitan areas with their local requirements where often a DPF is mandatory.

The particulate filter has been developed especially with regard to environmental aspects, serviceability and durability. Thus, the DPF has been large-sized to ensure the deposition of particles over a long period of time, resulting in longer intervals between regeneration cycles. In addition, all kinds of different requirements and load profiles are covered by the large-sized filter. As a special feature, the system is separable by means of two clamps and the filter element can be removed and cleaned manually. In contrast to many other separable systems, there is no new seal kit required when re-installing the filter element. This leads to significantly reduced maintenance costs. The manual reconditioning of the filter element, the "Easy Clean" service, is available from Hatz as an after-sales service. After ordering the "Easy Clean" service, a reconditioned filter element will be sent beforehand to the customer who returns the contaminated filter element to Hatz after exchange. Thus, the downtime of the machine is reduced to a minimum.

The OPU option is available for all versions of the 4H50 Series. In addition to the standard scope of delivery of the engine, all parts which are required for the operation of the engine are supplied as a ready-to-install solution. This includes radiator and intercooler mounted vibration-decoupled, as well as the required tubing and wiring harness. All parts are installed in the factory during the production process. Thus, the customer only needs to connect tank, pre-filter and pump as well as air filter, battery and control box.

The OPU is available in production quantities starting from one piece. The main application areas of the OPU are primarily working machines such as hydraulic lifts, hydraulic power units, forestry machinery, drilling rigs and stationary applications such as pumps and generators.

In addition to a low additional weight of just 82 kg, the OPU is characterized by its small installation dimensions. With box dimensions of 699 mm in width, 935 mm in length and 807 mm in height, the OPU can also be used in machines with restricted installation space.

The H Series as a prime example of resource conservation

In addition to its technical properties, the H Series can also score in terms of ecological characteristics. Due to the stringent downsizing concept and the reduction in weight of about 90 kg compared to competitor engines, valuable resources and energy are already saved in the processing of raw materials and the production process. But even during operation, the H Series engines are extremely economical; thanks to Bosch common rail system and a Hatz-developed combustion strategy, the consumption of 4H50TIC Tier 4 is below 240 g/kWh in a wide usable and realistic speed and torque range. These and other characteristics of the H Series are the reason that the 4H50TIC was voted among the top three finalists of the most prestigious environmental award in Europe, the GreenTec Award.

Furthermore, the development of 4H50TIC is funded by the Federal Ministry of Economics and Technology based on a decision of the German Bundestag due to the achieved and projected energy and resource savings.